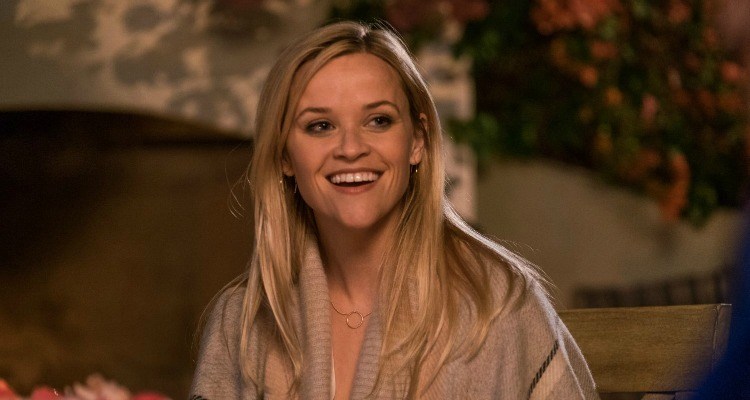 HOME AGAIN (USA/12A/97mins)
Directed by Hallie Meyers-Shyer. Starring Reese Witherspoon, Michael Sheen, Nat Wolff, Candice Bergen, Pico Alexander.
THE PLOT: After her film director father dies and leaves her his LA home, and her marriage falls apart, Alice (Reese Witherspoon) and her three kids move cross-country to start a new life. Not long after they arrive, Alice meets three young men in their twenties; Teddy (Nat Wolff), Harry (Pico Alexander) and George (Jon Rudnitsky) on a night out. It is not long before Alice’s mother Lillian (Candice Bergen) decides the three aspiring filmmakers should live in Alice’s guest home while they wait for their big break.
THE VERDICT: Written and directed by Hallie Meyers-Shyer, daughter of Rom-Com Queen Nancy Meyers, Home Again should have been the film to rejuvenate the rom-com which, truth be told, has been in decline for some time. Unfortunately, even with Reese Witherspoon and Michael Sheen on board, Home Again is vapid, predictable and uninteresting.
Reese Witherspoon does her best with Alice, but never manages to make the character jump off the screen. There is little commend the character or make her anything other than a collection of quirks and clichés, other than Alice being the daughter of a famous filmmaker, and it is hard to root for a character who does not feel like a real person, or even someone the audience can identify with. The three young men who move in with Alice seem to have one defining trait – the love interest, the cute one, the writer – and there is nothing else to commend them, even with all the superficial drama created in the screenplay. Michael Sheen does his best to make Alice’s former husband Austin a charming guy, but like the rest of the cast, small things are the ones that bother him the most, making him a profoundly unlikeable character.
Meyers-Shyer’s screenplay is one filled with cloches and predictable choices made by the characters. There is very little that happens in the screenplay that feels surprising or new, and the characters find small issues ones that cause the most problems; someone not being able to make a dinner date even though they said they may not be able to leads to screaming matches and the end of a romance. This means that Home Again goes from being a film with potential to be heightened but charming, to a film with unrelatable characters and preposterous situations.
As director, Meyers-Shyer never manages to get the pace of Home Again going, or to put the shine on a film filled with filmmakers, rich LA types and aspirational people. The film cuts between stories, meaning the whole thing feels rather messy, and even the scenes with the potential to be charming and comedic feel awkward and slightly stilted.
In all, there is very little to recommend ‘Home Again’ to audiences. God bless them, Sheen and Witherspoon try their best, but they are fighting against one dimensional characters, cheesy writing and vapid scenarios.
RATING: 1/5
Review by Brogen Hayes

GOODBYE CHRISTOPHER ROBIN (UK/PG/107 mins)Directed by Simon Curtis. Starring Domhnall Gleeson, Margot Robbie, Kelly Macdonald, Will Tilston, Alex Lawther, Stephen Campbell Moore.
THE PLOT: Alan Milne (Domhnall Gleeson) is a famous playwright who lives in Sussex with his glamorous but glacial wife Daphne (Margot Robbie). He’s haunted by flashbacks of the trench warfare he was subjected to in WWI. He soon produces an anti-war poem, feeding on the weary national feeling that the war definitely wasn’t over by the first Christmas. Their first, and only, child arrives not long after. In this family nobody is called by their real name, so they dub him Christopher Robin (Will Tilston). Young Christopher grows up to be an imaginative but dependent boy, needing attention and love – which he gets from friendly, reliable nanny Olive (Kelly Macdonald). Alan eventually plays with Christopher in their imaginary world and tells stories about his animal toys, leading to the creation of one Winnie The Pooh…
THE VERDICT: Recently voted the best-loved children’s book of all time, Winnie The Pooh never really caught the imagination of this reviewer’s younger self. Maybe just as well, as creation story ‘Goodbye Christopher Robin’ is unlikely to lead to a late-life discovery or a surge in book sales. It’s a strangely inert affair, that doesn’t seem to know what it wants to say about its author and his relationship with his son. On the surface, it’s a sort-of biopic of author A.A. Milne; his at times strained relationship with Christopher Robin; and how all this lead to Winnie The Pooh jumping from a familial woodland tale into the hearts and minds of the world.
Part of the problem with the script by Frank Cottrell Boyce and Peter Vaughan is that it lacks initial warmth. You’d expect a story like this to be quite cosy early on, but this is not the case. When Christopher Robin is born, Alan holds him like a Ming Vase – unsure of how to handle him or where to put him. Daphne seems blissfully unaware of how babies are born, later berating Christopher with the harsh news that he almost killed her in childbirth. Director Simon Curtis casts a twee, childlike air over the whole film but it’s an uneasy mix of tones, as the film also deals with PTSD, marital problems and how celebrities can further their own fame by peddling their children to the media (a modern touch, intended more for now than then).
Thankfully, there is some warmth later on courtesy of Olive – more of a mother figure than Daphne for sure. Also, Alan finally puts away the English stiff upper lip and starts to enjoy quality time with his son. Gleeson brings some much-needed depth of feeling here and this is the most appealing part of the film as the characters of Pooh, Tigger, Piglet and the others take on a life of their own. Robbie does what she can, but an actor of her talent is seriously underserved by the script. It never really nails down just what is wrong with Daphne and why she’s so indifferent to her son. It’s more than just bad parenting.
‘Goodbye Christopher Robin’ is a well-meaning film that might pass an undemanding, rainy Sunday afternoon. However, it’s so stiff and twee that it never really adds up to something in depth and satisfying. Winnie The Pooh surely deserved a proper honey pot, rather than this somewhat crocked one.
RATING: 2/5
Review by Gareth O’Connor