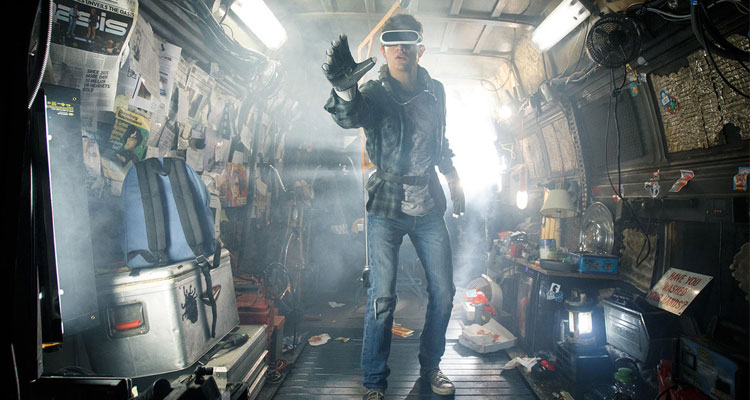 READY PLAYER ONE (USA / 12A / 140 mins)
Directed by Steven Spielberg. Starring Tye Sheridan, Olivia Cooke, Ben Mendelsohn, Mark Rylance, T.J. Miller, Simon Pegg.
THE PLOT: Columbus, Ohio, 2044. In a dystopian future, many people such as Wade (Tye Sheridan) live in The Stacks, a collection of trailers stacked high. He escapes humdrum reality by tapping into the virtual reality world of The Oasis where his avatar is known as Parzival. Designed by the late James Halliday (Mark Rylance), The Oasis allows users to live out alternate lives in a world infused with pop culture from Halliday’s formative years in the 1980s. Before he switched the off button, Halliday hid an easter egg inside the game, which promises the winner untold fortunes and control of The Oasis. Wade does some deep exploration to find the three keys which will unlock the easter egg. He also has to contend with a growing interest in rival gamer Art3mis (Olivia Cooke) and devious company man Nolan (Ben Mendelsohn), who wants control of The Oasis for his own nefarious ends…
THE VERDICT: Given that his own films as director, writer and producer have becoming enduring popular culture icons, Steven Spielberg was the ideal fit for an adaptation of ‘Ready Player One’. It’s an ideal marriage of director with material that speaks to his greatest strengths – an astute storyteller, a childlike sense of wonder about the world and a master craftsman whose films look and sound spectacular. If anyone knows what cinema is really about, then it’s Spielberg.
It’s based on Ernest Cline’s 2011 novel, adapted here by Cline himself and Zak Penn. It posits a world which is heavily influenced by virtual reality, with everyone escaping into a different world which is more than just a videogame or an escape. It’s a place where world-building is taken to the next level, all originated in the mind of creator Halliday. The idea of Halliday infusing his love of 1980s popular culture into his own creation is at the heart of this story. This is an important factor in the film’s undeniable success.
Given that a large part of the film takes place in the computer-generated Oasis, there was a danger that it might look like the most expensive videogame ever produced, with the gamepad in Spielberg’s hands. Thankfully, that’s not the case here. Amid all the explosions, car chases and spot-the-pop-culture references (The Glaive from ‘Krull’, the incantation from ‘Excalibur’, a trio of horror boogeymen and many more) and fantastical characters in The Oasis, there’s a very human heart beating. There’s plenty of fantasy, but it’s rooted firmly in reality. As a result, the regular switching between Columbus and The Oasis is seamless, as are the live action performances and excellent voice work in the digital realm.
The film is a visual feast, with one stand-out sequence involving our Oasis-bound heroes diving into a well-known and respected horror film to find a key. The loving attention to detail here is remarkable and is all the more poignant considering that the director of this film was a close friend of Spielberg’s. It may initially seem like a long film at 140 minutes, but it flies by and enticingly wants you to stay for more. Like the Road Dahl story that it’s inspired by, ‘Ready Player One’ is pure imagination. Released just in time for Easter, this is one easter egg that you’ll want to dig into and discover its many, delightful treasures.
RATING: 4 / 5
Review by Gareth O’Connor

ISLE OF DOGS (USA / Germany / PG / 101 mins)
Directed by Wes Anderson. Starring Bryan Cranston, Edward Norton, Bill Murray, Jeff Goldblum, Bob Balaban, Liev Schreiber, Greta Gerwig, Koyu Rankin, Konichi Nomura.
THE PLOT: Japan, 20 years from now. The vast metropolis of Megasaki is ruled by the cat-loving Mayor Kobayashi (Kunichi Nomara). Bearing a family tradition of despising dogs, he takes drastic action against the dog population who have succumbed to dog flu. He deports them all to Trash Island starting with Spots (Liev Schreiber), the beloved dog of his (distant) nephew Atari (Koyu Rankin). Atari crash lands on Trash Island to find Spots and bonds with a group of alpha dogs including stray outsider Chief (Bryan Cranston), Rex (Edward Norton), Duke (Jeff Goldblum), King (Bob Balaban) and Boss (Bill Murray). They set out across the desolate landscape to find Spots and restore their position as man’s best friend…
THE VERDICT: Having delivered his own unique take on stop motion animation with ‘Fantastic Mr Fox’, Wes Anderson returns to the same well for the delightfully daffy and imaginative ‘Isle Of Dogs’. It’s a singular vision, very much in tone with Anderson’s quirky back catalogue and eye for memorable characters. It just happens to be in painstaking stop-motion animation, with an added handmade feel that CGI animation can never match. The late, legendary Ray Harryhausen would be proud.
‘Isle Of Dogs’ is inspired by the films of Japan’s own sensei, Akira Kurosawa. Anderson’s script with Roman Coppola, Jason Schwartzman and Nomura pays due reverence to Kurosawa and the rich history of Japanese culture, even featuring Japanese titles and music. That gives it a slightly otherworldly aspect, while still rooting it in the mundanity of scrappy dogs trying to survive on a rat-infested, polluted island. This is contrasted with a mainland story involving Tracy (Greta Gerwig), an American exchange student who leads a revolt against the mayor. There’s a great sense of balance in the story here.
There’s a lot of charm and humour in how the story plays out. Anderson allows his excellent voice cast (including his repertory troupe of actors) to flesh out the canine cast in detail. There are lots of familiar voices here, but they sync up to their characters and personalities with ease. Anderson under-plays the idea of tugging at the heart-strings, even if he includes some cute puppy scenes. There’s a dark underbelly to the story, showing the dogs suffering and getting into tough fights (amusingly depicted by a cartoon-like cloud of dust). However, he keeps the tone positive throughout.
There’s so much visual invention here that it might require a second viewing to absorb all the detail in the film, from the colourful characters to the meticulous Japanese touches and the beautifully desolate landscapes of Trash Island. It becomes so much more than just a boy and his dog story. Anderson has created a distinctive and warmly funny doggy treat to add to his own cinematic universe – Andersonland if you will. Every dog has its day and this one is particularly memorable.
RATING: 4 / 5
Review by Gareth O’Connor

BLOCKERS (USA / 16 / 102 mins)
Directed by Kay Cannon. Starring John Cena, Leslie Mann, Ike Barinholtz, Geraldine Viswanathan, Kathryn Newton, Gideon Adlon.
THE PLOT: Best buds Kayla (Geraldine Viswanathan), Julie (Kathryn Newton) and Sam (Gideon Adlon) have graduated from high school and are about to celebrate prom night. This being a formative experience in the move from childhood to adulthood, the trio decide on a sex pact to finally do the business. Their respective parents Mitchell (John Cena), Lisa (Leslie Mann) and Hunter (Ike Barinholtz) have other ideas though. Upon finding out, Mitchell and Lisa are incensed, believing their daughters to still be children. Hunter isn’t as concerned, since he’s already clued in to the fact that Sam prefers girls. The trio set out on a long night to block the hanky-panky…
THE VERDICT: The sweet taste of ‘American Pie’ lingers in ‘Blockers’, a comedy that is better than anyone had a right to expect. It’s not hard to see the similarities with the breakthrough 1999 film. Millennial Pie so to speak, as it focuses on Prom Night and a group of now young adults partying a lusty night away. However, ‘Blockers’ strikes out on its own by focusing as much on the overly concerned parents as its young leads. This leads to hilarious results, showing the contrast between the killjoy parents and their children as they move towards recognition as adults.
The script by Brian and Jim Kehoe makes good use of this early on, hinting at the fact that the trio of parents were teenagers themselves at one stage. In the eyes of our parents we’ll always be children though. The attempts of these middle-aged parents to get down with the kids at a prom night party is frankly embarrassing, but it makes for great comedy. Debut director Kay Cannon, a co-producer on the Pitch Perfect sequels, mines the comedic potential of Cena’s dumb lug for maximum effect here. Likewise for the obsessively maternal Mann and the laid-back Barinholtz, who get into awkward scrapes with some kinky neighbours.
The script scores high on the laugh-o-meter, delivering some great gags. Though, the funniest gag from the trailer (Mitchell’s superhuman strength) is noticeably missing from the final cut. As is standard for these types of films, there are some gross-out moments which feel inserted for shock value. The comedy isn’t very sophisticated here, delivering a slightly pat, predictable message about acceptance, growing up and taking responsibility. For all its outrageous humour, gross-out moments and daftness, it’s really a rather sweet, likeable film. Given how many recent American comedies have utterly failed to be funny (e.g. Father Figures), ‘Blockers’ has a winning streak that brings it over the finish line with ease, just dodging a banana peel.
RATING: 3 / 5
Review by Gareth O’Connor