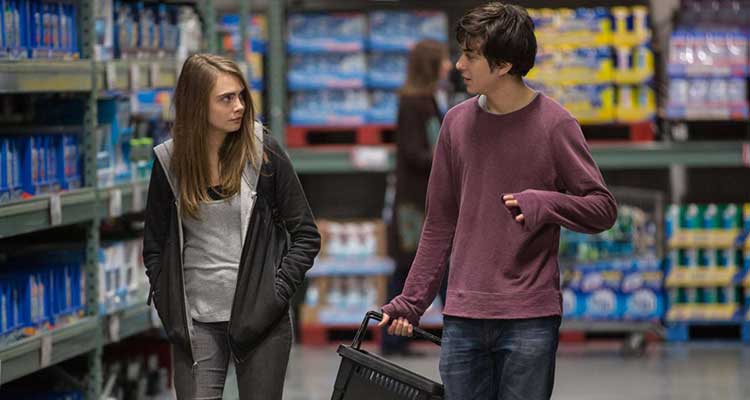 PAPER TOWNS (USA/12A/109mins)
Directed by Jake Schreier. Starring Cara Delevigne, Nat Wolff, Austin Abrams, Justice Smith, Jaz Sinclair, Caitlin Carver, Halston Sage.
THE PLOT: Ever since they were young friends, Quentin (Nat Wolff) has been in love with his neighbour Margo (Cara Delevigne). Over the years, the two grew apart, so Quentin is surprised when Margo turns up one night demanding he drive her around since she has nine things to do in one night. After a night of adventure and fun, where Quentin falls even deeper in love with Margo, she simply vanishes. Quentin quickly realises Margo has left clues as to where she has gone, and rounds up his friends to help track her down before prom.
THE VERDICT: PAPER TOWNS is the second film based on a John Green novel to be released in the past 18 months – the other being THE FAULT IN OUR STARS – and although this is another tale of first love and romance, it feels far less doomed and much more hopeful than the one that went before it.
Cara Delevigne is engaging and mysterious as Margo; the kind of girl that people flock to, and want to emulate, Delevigne brings the character beautifully to life on screen. Although she is not actually in the film that much, Delevigne is the one whose absence haunts the rest of the characters, and she is impactful enough to make this work when she does appear. Nat Wolff plays Quentin as a romantic, gentle soul who is completely fascinated with Margo and the idea of a happy ending. Austin Abrams and Justice Smith play Quentin’s friends Ben and Radar, and the three are lovely together on screen, both when they are playfully teasing and egging one another on. The rest of the cast is made up of Jaz Sinclair, Caitlin Carver and Halston Sage, with a surprise and small appearance from Jay Duplass.
John Green’s story, written for the screen by Scott Neustadter and Michael H. Weber seems to be one about endings, but is really one about beginnings and moving forward with life. The dialogue is full of clever lines and romantic notions – Quentin’s voiceover opens the film declaring he believes that everyone gets one miracle, and his was Margo Roth Speigelman – and Margo is idealised enough for her randomly capitalising letters within words because ‘the rules are so unfair to the letters in the middle’ to be enigmatic, rather than simply annoying. The film is essentially a road trip coming of age tale, but rather than boobs and beer, the characters get up close and personal with their ideas about love and their preconceptions about other people.
Director Jake Schreier does well enough when the characters are based in Orlando; Delevigne is the heart and soul of the first half hour, but the pacing and magnetism of the film suffering as soon as those left behind hit the road in search of Margo and adventure. That said, the film does capture the feel of mystery and those final days of school rather well, and allows the characters to cling to their last days together without ever becoming too sentimental. As well as this, the film is resolved in a way that tilts expectations slightly, while still being a little trite, but still satisfying.
In all, PAPER TOWNS is a sweet story about the expectations we have about love, and the people in our lives. Cara Delevigne is great in her first leading role and Nat Wolff captures the feel of a young man experiencing love for the first time. There are times when the film feels overly long and rather convenient, but it is resolved in a satisfying, if sentimental manner.
RATING: 3/5
Review by Brogen Hayes