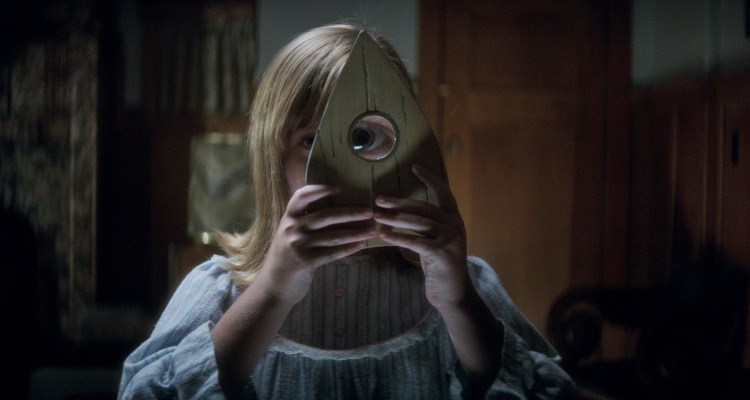 OUIJA: ORIGIN OF EVIL (USA/16/99mins)
Directed by Mike Flanagan. Starring Doug Jones, Elizabeth Reaser, Henry Thomas, Lulu Wilson, Annalise Basso
THE PLOT: Fifty years before the events of ‘Ouija’, fortune teller Alice Zander (Elizabeth Reaser) buys a Ouija board to spice up her show, which also happens to be a scam. When her young daughter Doris (Lulu Wilson) starts playing with the board, she gets in touch with a spirit she believes to be that of her dead father, but when things take a turn for the sinister, it is up to Alice, her eldest daughter Paulina (Annalise Basso) and priest Father Tom (Henry Thomas) to find out just what or who Doris has been in contact with.
THE VERDICT: This sequel to the 2014 film ‘Ouija’ tries to make up for the first film being critically panned, but while the first hour of the film is an intriguing slow burn, everything goes to hell in the final act… And not in a good way.
Elizabeth Reaser leads the cast as Alice, a single mother and widow trying to come to terms with her husband’s death and the financial pressures that has brought on the family. Reaser does not have a whole lot to do in terms of showing range, but she does fine in the role. Annalise Basso plays teenager Paulina, and she is the voice of dissent in the house when the spirits start talking to Doris. Basso, again, is fine in the role, but does best in the stupendously absurd final act of the film. Lulu Wilson plays nine-year-old Doris, who fans will remember is the main antagonist of the first film, and although it is more than a little cliché that it is a young child that is – again – the creepy one, she does fine in the creepy part of the story. Sadly, everywhere else in the film Wilson shows that she is a young actress who does not have a lot of range, as she seems wooden and silted in the role. Henry Thomas is fine in the role of Father Tom, and brings a gentlenesss and understanding to the film, and a house filled with characters who seem to be always at odds with one another.
Since this is a prequel, screenwriters Mike Flanagan and Jeff Howard had the unenviable task of reverse engineering a story for ‘Ouija: Origin of Evil’ from the events of the 2014 film. The first hour of the film is solid and builds up the feeling of dread and creepy mystery that the film needs, but it is in the revelation of just what – or who – Doris is communing with that the film takes a turn for the ridiculous and begins to fall apart. There is the feeling that Flanagan and Howard carefully constructed the establishing hour of the film, even including a reference to The Exorcist, but ran out of ideas when it came to the final set piece, which undermines the entire story and often feels obvious and unintentionally funny.
As director, Mike Flanagan paces the film well enough, and adds touches from the 1960s to lend an air of authenticity to ‘Ouija: Origin of Evil’, including an old Universal Pictures jingle at the start of the film. The actors struggle to make their characters rounded, and even though we are given a lot of back story, they never truly feel fleshed out or real. Add to this a truly one note and cringe-worthy performance from young Wilson, and ‘Ouija: Origin of Evil’ begins to flounder.
In all, ‘Ouija: Origin of Evil’ starts off well in terms of story and building a feeling of anticipatory dread, but it seems as though the screenwriting team ran out of ideas, so silly, preposterous and unlikely is the final set piece. It is also hard for the film to shake the feeling that it is completely unnecessary, and ruins what little mystery there was about the first film.
RATING: 2/5
Review by Brogen Hayes