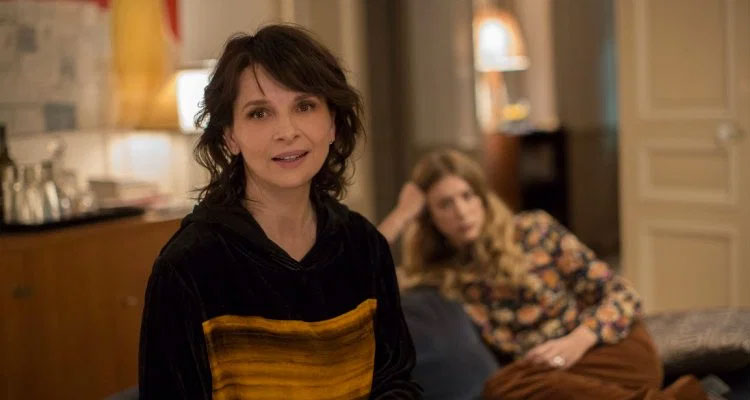 The Plot: Alain (Guillaume Canet) is a respected Parisian publisher who has resisted the move towards e-readers and digital platforms – until now. He’s hired expert Laure (Christa Theret) to help the company move with the times. He’s also carrying on an affair with Laure, unknown to his wife Selena (Juliette Binoche) who is an actor on a TV cop show. Unknown to Alain, Selena is carrying on an affair with writer Leonard (Vincent Macaigne). Leonard can only write from his life experiences, which are thinly fictionalised accounts of his sordid affairs. His partner Valerie (Nora Hamzawi) suspects something though. As their lives intersect, the lines between fact and fiction begin to blur…

The Verdict: After a quick one-two of working in English with Kristen Stewart on mood pieces Clouds Of Sils Maria and Personal Shopper, Non-Fiction finds director Olivier Assayas in a lighter, frothier mood. Maybe just as well, given how muddled and unsatisfactory Personal Shopper was (though Stewart was excellent). It’s a Woody Allen-style relationship drama but with a French flair and flavour. Ooh la la… Those wacky French and their affairs. Almost everyone in this film is in a committed relationship, but cheating on their partner as if it was an everyday occurrence. The twist here is that Leonard, an earnest but slightly pathetic middle-aged man, writes auto-fiction about the lives of the women he encounters. To the point where it’s not so much fiction as non-fiction. Selena pops up in one of his books, but under a different name. Alain doesn’t spot it though and flatly turns down his manuscript, tired of Leonard’s lack of literary inspiration.

The onscreen French title for the film is Doubles Vies or Double Lives, which is an equally apt description for the bed-hopping antics going on here. What makes the film so enjoyable is the way that Assayas gently teases out the intersecting lives of these couples without resorting to nasty arguments and acrimonious break-ups. His script is firmly set to a positive tone, but with tints of reality to keep the characters and their actions in check. A running joke in the film involves a recount of an intimate encounter between Leonard and Selena in a cinema during Star Wars Episode VII: The Force Awakens. In Leonard’s book, this becomes The White Ribbon – an altogether different and far more ponderous film about the rise of tyrannical power. Assayas moves between scenes with each couple with ease, suggesting that hardly anyone here is being honest with themselves and others. That doesn’t matter so much though. These are flawed characters who are living their lives the way they see it. At least there aren’t children involved.

The performances here are uniformly excellent. Canet brings a smugness to his role as a publisher who needs to change with the times, but still clings to the past like it was a childhood teddy bear. Macaigne is by turns hilarious and heartfelt – watch his facial reactions as he struggles with a probing Q&A at a book signing. Binoche is as luminous as always, bringing warmth and depth to an actor who seems content but isn’t really. Theret and Hamzawi also bring inner resolve and gentle humanity to what could have been underwritten roles. It’s a smart, well-made film about the Parisian literary scene and it knows it too. An in-joke just before the credits is very meta, again blurring the lines between fact, fiction and everything else in between. Writers put themselves into their work, so one has to wonder how much of Assayas is in his script. Non-Fiction is a light but tasty French Fancy and a page-turner too that comes recommended.