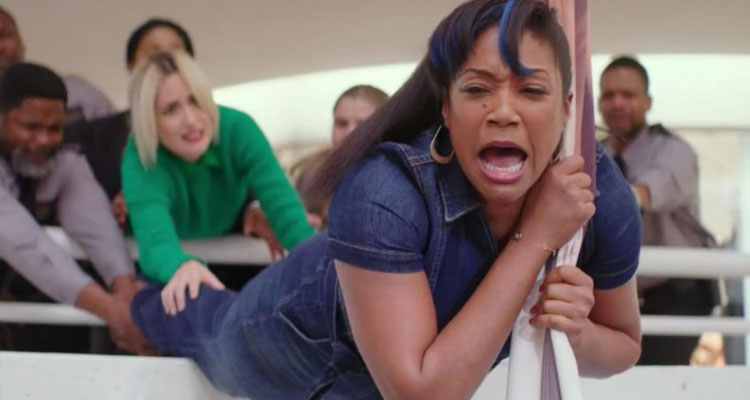 In short: More misses than hits

The Plot: BFFs Mel (Rose Byrne) and Mia (Tiffany Haddish) not only live together but also run their own make-up store. Mel is the brains of the operation, while Mia is the brawn. Their shop has had success, but the lack of diversifying their content has put their accounts into the red. In a move to refresh the company, Mel convinces Mia to let their garage startup be bought by Claire (Salma Hayek). Claire is a glamourous and successful businesswoman, but knows competition when she sees it and wants to gobble it up early on. When Claire trashes their ideas for new content, the friendship between Mel and Mia is tested…

The Verdict: Someone had a bad day at the office. Maybe it was in the writers room – all three of them that is. That’s the most likely explanation for the final product delivery of Like A Boss. It’s a typically glossy and manufactured Hollywood comedy which follows the formulaic playbook. It also struggles to define itself in a saturated cinematic marketplace where there aren’t enough female-led films to begin with (hence the lack of female representation during Awards Season recently). Like A Boss isn’t concerned with being a beacon of hope though. Its only concern is to make people laugh at its absurdity along with its cloying need to be liked. It does have a few mild chuckles to offer but nothing that’s going to threaten Rose Byrne’s own Bridesmaids still sitting pretty on the throne.

The plot revolves around the friendship between Mel and Mia as new business partner Claire tries to mix things up and possibly break them up for her own business interests. There is an agreeable storyline here involving two friends with different ideas as to how the business should continue. The palpable chemistry between Byrne and Haddish certainly helps to grease the wheels, their easygoing charm depicting the bonds of female friendship even in trying times. Someone give these talented actors / comedians a better script to work with please. In predictable fashion, they have to come apart before they can find their way back to each other again. Screenwriting 101 strikes again. It’s so formulaic that you can sense that the script slipped past the QC department unnoticed. It then went through the office photocopier several times until the jokes faded and the plot lost any finesse it previously had. More misses than hits.

A good example of this is a baby shower scene which involves a novelty cake. It’s meant to look like a certain body part but instead looks like a mind-meld between David Lynch and H.R. Giger gone wrong. For a supposed comedy, it’s not as funny as it thinks it is. Hayek tries to inject some fun into her scenes, but struggles to get past the false teeth. the over-coiffed hair and to make Claire little more than a corporate villain crossed with Jessica Rabbit. It’s typical of this film that the best chuckles come courtesy of quirky supporting players like Jennifer Coolidge’s dim but brassy employee Sydney and fantastically prissy make-up maker Barrett (Billy Porter). Porter undoubtedly steals the show, taking bad news in the most dramatic way possible. While it does have its moments, Like A Boss has a general air of laziness about it. There’s nothing here that you haven’t seen before. Only it’s been done better. It’s like that moderately irritating but just-about tolerable person in the office who you’d rather just avoid. It narrowly scrapes a pass in this performance review.