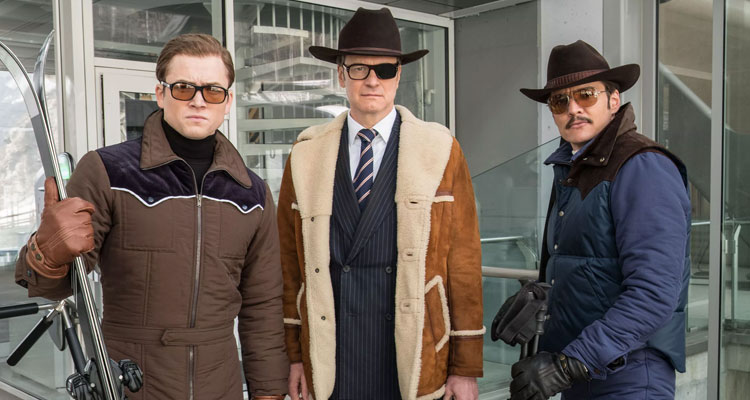 KINGSMAN: THE GOLDEN CIRCLE (UK | USA/16/141mins)
Directed by Matthew Vaughn. Starring Taron Edgerton, Mark Strong, Julianne Moore, Jeff Bridges, Channing Tatum.
THE PLOT: The Kingsman gentleman spy agency comes under attack from an external force, which destroys their key sites. Eggsy (Taron Egerton) and reliable right hand Merlin (Mark Strong) find themselves homeless. A clue about where to go next leads them to Kentucky, where they discover their American counterparts, Statesman, under the cover of a whiskey-making business. Run by Champagne (Jeff Bridges) along with cowboy Tequila (Channing Tatum), lasso-cracking Whiskey (Pedro Pascal) and tech expert Ginger (Halle Berry), they all uncover a plot involving drug cartel The Golden Circle. Run by the self-obsessed Poppy (Julianne Moore), who has her own theme park in Asia, she’s intent on world domination. Meanwhile, an old friend returns from an apparent death…
THE VERDICT: ‘Kingsman: The Secret Service’ was a hoot. An irreverent spy film, it gleefully paraded its OTT-ness like a badge of honour (‘give me a far-fetched theatrical plot any day’) – and then some. A sequel was not only inevitable, but welcome. ‘Kingsman: The Golden Circle’ gets down to business straight away, with Eggsy involved in a break-neck fight in – and out – of a London cab. Set your disbelief to stun, as returning director Matthew Vaughn sets out to top the first film. He almost succeeds.
Once again based on the comic book by Mark Millar and Dave Gibbons, there’s an American twist this time around. The introduction of the Statesman characters is well-handled, in that they’re equally as batty as their English counterparts. Culture clash moments mostly involve throwaway gags, with the potential for more put on ice with a particular character. The script is a little too busy to take time to explore the contrasting spying styles of the two agencies. There’s a lot of plot to get through before we even arrive at Poppy’s colourful lair. Some judicious pruning wouldn’t have gone amiss here.
It also seems as if the novelty of the first film has worn off, with its twisted take on My Fair Lady no longer applicable. Eggsy is less well-defined, with a sub-plot involving his Swedish Princess substituted to keep his character development moving. Thank heavens then for the return of Colin Firth’s Harry, who is a joy to watch and is easily the best thing about the film. Moore’s super-villainess is good fun too, happily feeding a potential henchman to a meat grinder early on. Head first of course, dear boy. She gets the tone of the character just right.
The globe-hopping action is well-staged, from shoot-outs to lasso fights to punch-ups with Poppy’s bionic henchman. It’s all jolly good fun, done in the best possible taste (or not). There’s also a very funny appearance by a certain flamboyant musician – less of a cameo and more of a supporting part. While it does have some flaws and doesn’t quite impress the way its predecessor did, ‘The Golden Circle’ still has a lot to recommend it. It goes for gold, but turns up silver which is still a decent result.
RATING: 3 / 5
Review by Gareth O’Connor