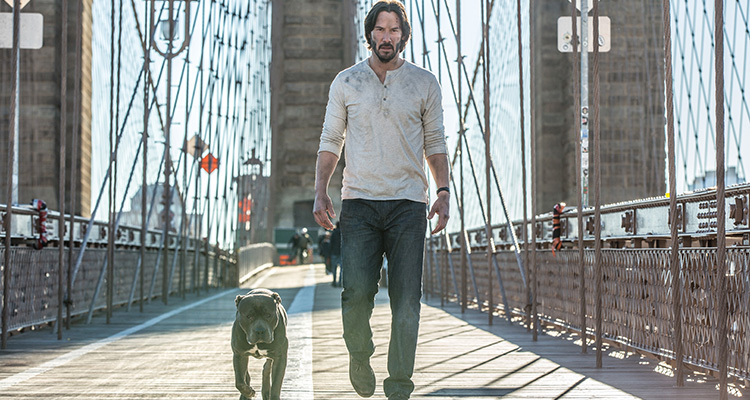 JOHN WICK: CHAPTER 2 (USA/16/122mins)
Directed by Chad Stahelski. Starring Keanu Reeves, Ruby Rose, Ian McShane, Riccardo Scamarcio, Common
THE PLOT: Immediately after the events of ‘John Wick’, our titular hero is still on a mission to get his car back. Once he does, an old acquaintance visits him to get John to kill his sister, so he may take her seat at the table of power. The assassination goes fairly smoothly, but when John learns a large bounty has been put on his head, all bets are off.
THE VERDICT: ‘John Wick: Chapter Two’, the sequel to 2014’s gloriously violent, silly and fun ‘John Wick’ has finally reached Irish cinemas. The good news that the over the top Neo Noir feel of the first film is present and accounted for, as is the violence and sense of fun, but the bad news is that ‘John Wick: Chapter Two’ is never quite sure when it has worn out its welcome.
Keanu Reeves returns as John Wick, and although Reeves still struggles making even the simplest lines of dialogue feel believable, he is physically all there as John Wick, and makes the character imposing, badass and full of skill. The rest of the cast features Peter Stormare, Ruby Rose – who has to be the busiest actor out there at the moment – Common, Ian McShane, Claudia Gerini and John Leguizamo. All of the cast are fine in their roles, but it is worth remembering that ‘John Wick: Chapter Two’ is not a film about acting, it is a film about killing – and dying – in the most spectacular fashion possible.
Derek Kolstad’s screenplay brings back all the best elements of the first film, including John’s car, the Continental hotel and a labyrinthine setting for a final set piece. The dialogue is minimal and not all that inspiring, but the action sequences nail the colours of the film firmly to the mast, and although the story feels rather reminiscent of the first film, this just about works on screen. Where the film falls down, however, is in feeling drawn out and overly long, and John making some out of character decisions.
As director Chad Stahelski keeps the first half of the film tight and wonderfully over the top, but it is in the second half that the director seems to have got caught up in the myth of John Wick, leaving the film feeling overly long and drawn out; even the incredible fight scenes become repetitive and uninspiring as time goes on. That said, there is a lot of fun to be had with ‘John Wick: Chapter Tw’o, and the energy coming off the screen is hard to resist.
In all, ‘John Wick: Chapter Two’ is not quite the masterpiece that the original was. There are times when the film feels as though it has got caught up in its own myth, and although all the elements are there, the extended running time means that ‘John Wick: Chapter Two’ ends up outstaying its welcome.
RATING: 3.5/5
Review by Brogen Hayes