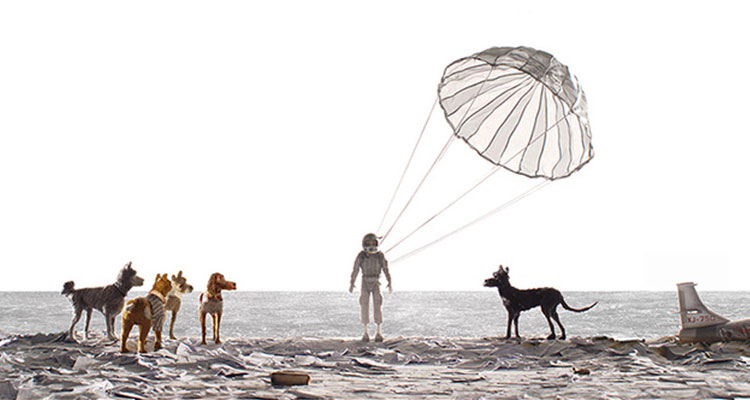 ISLE OF DOGS (USA / Germany / PG / 101 mins)
Directed by Wes Anderson. Starring Bryan Cranston, Edward Norton, Bill Murray, Jeff Goldblum, Bob Balaban, Liev Schreiber, Greta Gerwig, Koyu Rankin, Konichi Nomura.
THE PLOT: Japan, 20 years from now. The vast metropolis of Megasaki is ruled by the cat-loving Mayor Kobayashi (Kunichi Nomara). Bearing a family tradition of despising dogs, he takes drastic action against the dog population who have succumbed to dog flu. He deports them all to Trash Island starting with Spots (Liev Schreiber), the beloved dog of his (distant) nephew Atari (Koyu Rankin). Atari crash lands on Trash Island to find Spots and bonds with a group of alpha dogs including stray outsider Chief (Bryan Cranston), Rex (Edward Norton), Duke (Jeff Goldblum), King (Bob Balaban) and Boss (Bill Murray). They set out across the desolate landscape to find Spots and restore their position as man’s best friend…
THE VERDICT: Having delivered his own unique take on stop motion animation with ‘Fantastic Mr Fox’, Wes Anderson returns to the same well for the delightfully daffy and imaginative ‘Isle Of Dogs’. It’s a singular vision, very much in tone with Anderson’s quirky back catalogue and eye for memorable characters. It just happens to be in painstaking stop-motion animation, with an added handmade feel that CGI animation can never match. The late, legendary Ray Harryhausen would be proud.
‘Isle Of Dogs’ is inspired by the films of Japan’s own sensei, Akira Kurosawa. Anderson’s script with Roman Coppola, Jason Schwartzman and Nomura pays due reverence to Kurosawa and the rich history of Japanese culture, even featuring Japanese titles and music. That gives it a slightly otherworldly aspect, while still rooting it in the mundanity of scrappy dogs trying to survive on a rat-infested, polluted island. This is contrasted with a mainland story involving Tracy (Greta Gerwig), an American exchange student who leads a revolt against the mayor. There’s a great sense of balance in the story here.
There’s a lot of charm and humour in how the story plays out. Anderson allows his excellent voice cast (including his repertory troupe of actors) to flesh out the canine cast in detail. There are lots of familiar voices here, but they sync up to their characters and personalities with ease. Anderson under-plays the idea of tugging at the heart-strings, even if he includes some cute puppy scenes. There’s a dark underbelly to the story, showing the dogs suffering and getting into tough fights (amusingly depicted by a cartoon-like cloud of dust). However, he keeps the tone positive throughout.
There’s so much visual invention here that it might require a second viewing to absorb all the detail in the film, from the colourful characters to the meticulous Japanese touches and the beautifully desolate landscapes of Trash Island. It becomes so much more than just a boy and his dog story. Anderson has created a distinctive and warmly funny doggy treat to add to his own cinematic universe – Andersonland if you will. Every dog has its day and this one is particularly memorable.
RATING: 4 / 5
Review by Gareth O’Connor