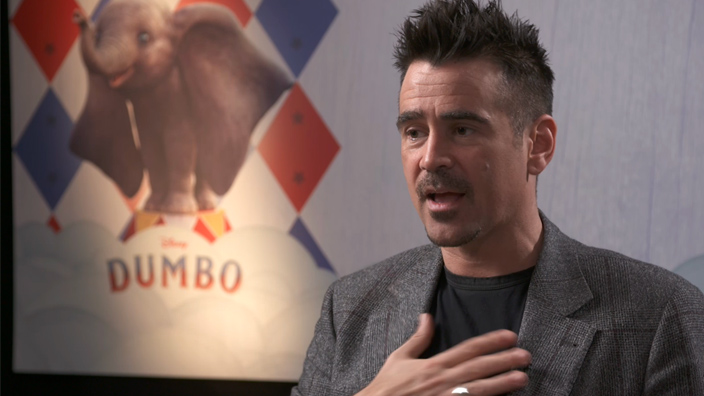 Visionary director Tim Burton takes on the live action adaptation of Disney’s classic 1941 animation DUMBO this month. The film stars Irish actor Colin Farrell in the role of Holt Farrier. Check out our interview with Colin below.

So, Colin, do you remember your first experience with Disney, the first Disney film you saw?

Your children are getting to that age now are you excited to show them Dumbo?

They’re a tricky audience my boys they’re not too impressed. They may go in the other direction completely because of the virtue of me being their dad and being in the film so I have to be cautious as to what to expect. It’s one of the nice kickbacks of doing this is that it’s something they can see and even more for just my kids. To do something that is orientated towards children and families is really lovely. I haven’t had that experience I mean Fantastic Beasts was as close to something that I did that was for a broad spectrum of ages but Dumbo very much has the spirit and the wonder and the fear of what many of us experience in childhood at the centre of it. So to be in a film that even the premieres we’ve done, the screenings, there are kids everywhere. It’s beautiful to be a part of something that is bringing a bit of joy to the world.

Beautiful. Did you ever get to interview him?

I have not no.

Oh he’s just wonderful really is a gorgeous human being and just every cell in his body seems to vibrate with creative energy and imagination and his fingerprint is everywhere to be found in the process – costumes, set design, the design of the baby elephant of course and he’s very particular in the way he directs and there are a lot of unfinished sentences and his mind goes very fat but he was beautiful to be around and look someone who has imagined into existence the worlds he has over the last 30 years is inevitably going to be a special dude so I had such a joy working with him.

Yeah man, they did a bang up job. The only things that didn’t exist were anything in the distance, the Ferris wheels, the rollercoaster, any time you see the sky because the whole film was shot inside we didn’t shoot one frame outside but all the circus stuff, the tents, all the grass, he filled it with 150 circus performers from all 4 corners of the globe. I mean I was a child in a sandbox. Every day going to the office did not feel like a chore. It seldom does I love doing what I do but it was a little bit more magical this time.

Of course, he surrounded you with an incredible cast. You have Danny DeVito, Michael Keaton, Eva Green you have your two children what were they like to work with?

Easy. I’ve been pretty lucky through the years, 20 years where I haven’t had a hard time, a couple of tricky days with some of me fellow thesps, as you do when you work with people but I’ve been very lucky I’ve no horror stories and this was the furthest from that. Tim had worked with Michael, Danny, and Eva a number of times each and so I felt there was already a family that was already established albeit a delightfully dysfunctional one and that I was stepping in line with them so it was lovely.

Do you hope now you’d get to become one of those returning players?

I would do anything with him. I would love to but if it’s one and done I’m okay with that as well. I felt spoilt with this experience but I would do anything for the man and I understand why people whether it’s Johnny (Depp) and all the films he’s done with Tim or Michael and Danny and Eva who’ve returned to work with him because he’s pure magic.

What was like filming some of those scenes with Eva and Dumbo because they looked quite death-defying?

Yeah, it was. There were some times where I was watching certain things and I had more wonder and I felt more wonder inside than I should have been experiencing as somebody playing somebody who has been around the circus a lot and who has seen a lot of this daredevilry. It was pretty extraordinary to see some of the things like the whole dance routine the layer cake scene and the dancers and the horses going around the first time we see Michael Keaton’s circus that was extraordinary to observe and the trapeze work was also something to see. There were quite often days where I was quite excited about what I was going to see that day as an audience member, not an actor. It defied any jadedness I may have picked up over the years because I got caught up in the whole thing. It was very beautiful to see this world come to life.

You talked about it there the first time we meet Michael Keaton. What was it like sitting down and watching all that madness unfold with the clowns and I don’t even know what else to describe going on in that scene?

Honestly, in 20 years, the day that I arrived on that set was for me and the kid in me one of the most overwhelming experiences I’ve had. I had walked that set on my own the day before and it’s an extraordinary set with nobody on it and with minimal lights. Did you ever have that fantasy of being locked in a department store at night?

It’s a little bit like that and then I went out did make-up and wardrobe and all that jazz. So I came around the corner walking in from outside into this neon stage and there are 600 people a brass band of 20 about 20 head of horse with people on the horseback about 12 Ford model T cars from the early part of the 20th Century and on action, everything went at the same time. The brass band lit up the horseriders were trotting, there were these cars. I welled up when I saw it because it was just so powerful to see that level of imagination and craft from everyone involved, and the wash of colour it was just magic. Honestly, it was pure movie magic and I’ve been doing this shit awhile so I’ve seen some lovely things but it took the biscuit.

Well, listen Colin thank you so much. It’s been magic talking to you.