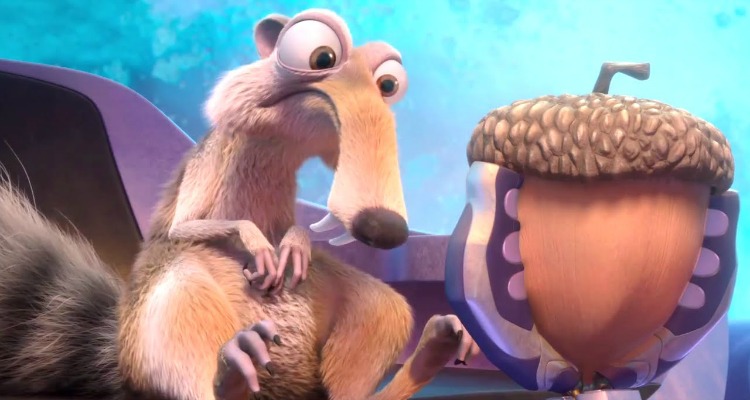 ICE AGE: COLLISION COURSE (USA/G/94mins)
Directed by Mike Thurmeier and Galen T. Chu. Starring Ray Romano, Jennifer Lopez, Simon Pegg, Denis Leary, Nick Offerman.
THE PLOT: When Scrat discovers a spaceship that flies him away from Earth, his relentless pursuit of his precious acorn sets off a chain of events that sends a meteor on a collision course with his home planet. On Earth, Manny (Ray Romano), his family and friends lead a race for survival that relies more than a little on impossible feats.
THE VERDICT: For those keeping track, ‘Ice Age: Collision Course’ is the fifth movie in the franchise, and one that seems to be running low on ideas and increasingly mixing the fantastical with the manic.
Much of the voice cast from the first four ‘Ice Age’ films have returned for this new outing, including Ray Romano, Jennifer Lopez, John Leguizamo, Simon Pegg, Queen Latifah, Denis Leary and Chris Wedge, and they are joined by Nick Offerman, Stephanie Beatriz, Jessie J, Jesse Tyler Ferguson and Neil deGrasse Tyson. All of the cast do fine in their roles, but they are struggling against a screenplay that seems to rely on manic energy and highly topical jabs at popular culture, rather than a coherent and engaging story.
Yoni Brenner and Michael J. Wilson seem to have started their idea for the screenplay with a meteor heading to Earth and added everything in after the fact. The jokes, such as they are, revolve around hugely topical jokes – such as hashtags – that not only feel out of place in this prehistoric setting, but also will not age well, manic characters doing manic things and a llama that has found enlightenment. The story feels thin and uninspired, and there is only so much of manic screeching that the audience can take before they begin to check out.
Directors Mike Thurmeier and Galen T. Chu try to play up the fun, slapstick, Tom & Jerry-esque feel of the film, but this wears thin very quickly. There is not enough story to fill the gap left by the absence of actual laughs and the pacing of the film struggles to hold the audience interest as the danger feels fabricated and not all that dangerous, to be honest. Add to this the old fashioned feel of the film, with many of the voice cast less famous than they were when the first film came out, slapstick and jokes about daughters getting married and protective fathers, and there is very little new or exciting about ‘Ice Age: Collision Course’.
In all, there is a little fun to be had with ‘Ice Age: Collision Course’, but many of the jokes don’t land, the action feels forced and there is an anachronistic feel to the film that pulls the audience away from the action and potential emotional engagement. We have seen the stories used to make up the film done before and done better, and although kids may enjoy the slapstick element of the film, all the screeching and manic energy of the film will leave adults feeling exhausted and yearning for an animated film that has a truly warm heart and emotional engagement.
RATING: 2/5
Review by Brogen Hayes