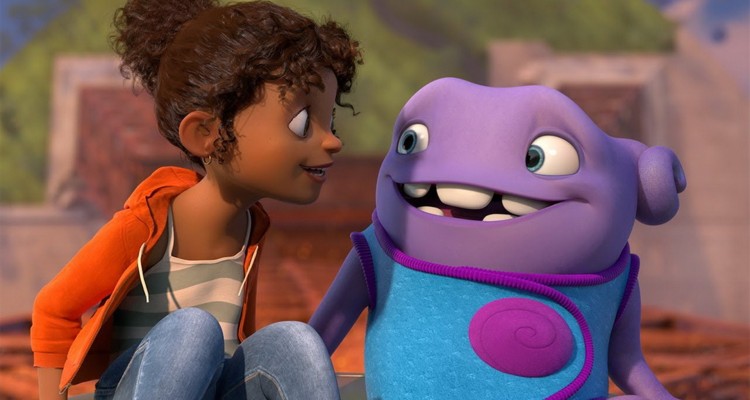 HOME (USA/G/94mins)
Directed by Tim Johnson. Starring Jim Parsons, Steve Martin, Rihanna, Jennifer Lopez.
THE PLOT: The Boov – a brightly coloured and so-ugly-they’re-cute race of aliens – have been on the run from their mortal enemy for a long time. Running from planet to planet, they find themselves at Earth and relocate the humans to custom-built towns so they can settle into the cities. When Oh (Jim Parsons) accidentally lets the galaxy know where The Boov are, he finds himself on the run from his own people. Tip (Rihanna) is the last human left in the city, desperately trying to find her Mum, who was taken to one of the new cities. It’s not long before Oh and Tip find each other, and realise they need one another to survive.

THE VERDICT: Based on the book The True Meaning of Smekday by Adam Rex, HOME is a beautifully animated film, featuring adorable creatures, and a strong message about what’s important in life. Oh, and there’s tons of adventure and silliness to keep the young ‘uns going, and the adults giggling.

Jim Parsons as Oh and Rihanna as Tip are the emotional heart and soul of the film, and they do well with their roles. Parsons’ character talks a little like a LOLCat, so if you find this annoying, best to bow out now. Parsons makes this work for the character though, making Oh charming and curious and just enough of a misfit to be loveable. Rihanna perhaps gives the best performance of her short acting career as Tip, and fills the character with emotion and feistiness. Steve Martin brings the silly as Captain Smeck and Jennifer Lopez rounds out the cast as Lucy.

Tom J. Astle and Matt Ember’s screenplay mixes action and adventure with a decent amount of humour and emotion, with great results. The film is smart and funny, with plenty of slapstick and LOLCat dialogue to keep the audience entertained. Tim Johnson’s direction keeps the laughs coming and the adventure bright, but allows the film to pack an emotional punch when needed. The Boov are ugly cute creatures who change colour with their emotions, travel in bubbles and are clueless about human interaction. This sounds cute – and it is – but the film very cleverly points out that there is a lot about life that The Boov are missing. That said, the film suffers from using music – usually Rihanna songs – to underscore emotional moments, this is fine in the light hearted moments of the film, but when the emotion kicks in, the music feels manipulative and wholly unnecessary.

The look and feel of the film are superb; the design of the creatures is beautiful and unlike any cute little aliens we have seen before. The design touches, such as the use of circles and colour adds to the cartoon cute feel of the film, which works surprisingly well.

In all, HOME is a beautifully animated film with a lovely message about acceptance, fear and belonging. Parsons, Martin and Rihanna do well with their roles, giving the film warmth and humour, but the overuse of Rihanna songs that labour the emotion drags the film down from superb to very good. No mean feat, but a shame.