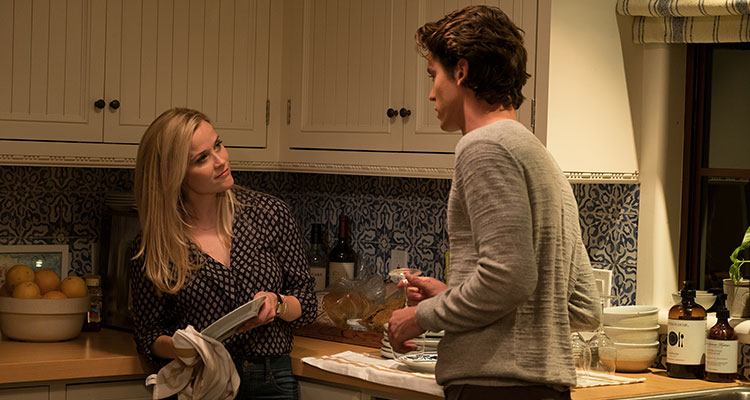 HOME AGAIN (USA/12A/97mins)
Directed by Hallie Meyers-Shyer. Starring Reese Witherspoon, Michael Sheen, Nat Wolff, Candice Bergen, Pico Alexander.
THE PLOT: After her film director father dies and leaves her his LA home, and her marriage falls apart, Alice (Reese Witherspoon) and her three kids move cross-country to start a new life. Not long after they arrive, Alice meets three young men in their twenties; Teddy (Nat Wolff), Harry (Pico Alexander) and George (Jon Rudnitsky) on a night out. It is not long before Alice’s mother Lillian (Candice Bergen) decides the three aspiring filmmakers should live in Alice’s guest home while they wait for their big break.
THE VERDICT: Written and directed by Hallie Meyers-Shyer, daughter of Rom-Com Queen Nancy Meyers, Home Again should have been the film to rejuvenate the rom-com which, truth be told, has been in decline for some time. Unfortunately, even with Reese Witherspoon and Michael Sheen on board, Home Again is vapid, predictable and uninteresting.
Reese Witherspoon does her best with Alice, but never manages to make the character jump off the screen. There is little commend the character or make her anything other than a collection of quirks and clichés, other than Alice being the daughter of a famous filmmaker, and it is hard to root for a character who does not feel like a real person, or even someone the audience can identify with. The three young men who move in with Alice seem to have one defining trait – the love interest, the cute one, the writer – and there is nothing else to commend them, even with all the superficial drama created in the screenplay. Michael Sheen does his best to make Alice’s former husband Austin a charming guy, but like the rest of the cast, small things are the ones that bother him the most, making him a profoundly unlikeable character.
Meyers-Shyer’s screenplay is one filled with cloches and predictable choices made by the characters. There is very little that happens in the screenplay that feels surprising or new, and the characters find small issues ones that cause the most problems; someone not being able to make a dinner date even though they said they may not be able to leads to screaming matches and the end of a romance. This means that Home Again goes from being a film with potential to be heightened but charming, to a film with unrelatable characters and preposterous situations.
As director, Meyers-Shyer never manages to get the pace of Home Again going, or to put the shine on a film filled with filmmakers, rich LA types and aspirational people. The film cuts between stories, meaning the whole thing feels rather messy, and even the scenes with the potential to be charming and comedic feel awkward and slightly stilted.
In all, there is very little to recommend Home Again to audiences. God bless them, Sheen and Witherspoon try their best, but they are fighting against one dimensional characters, cheesy writing and vapid scenarios.
RATING: 1/5
Review by Brogen Hayes