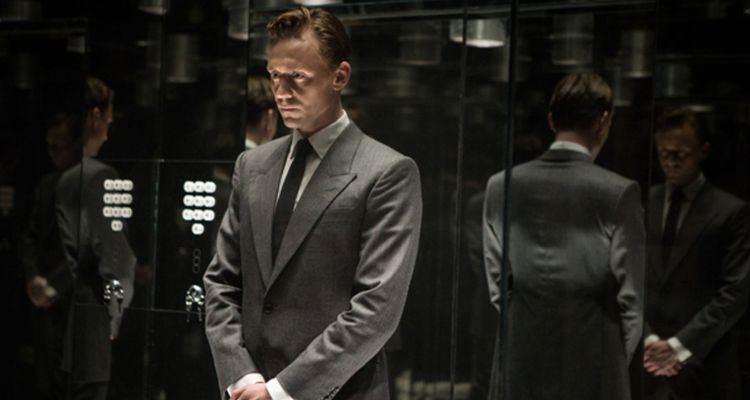 HIGH-RISE (UK/IFI/119mins)
Directed by Ben Wheatley. Starring Tom Hiddleston, Jeremy Irons, Sienna Miller, Elizabeth Moss, Luke Evans, James Purefoy, Keeley Hawes, Dan Renton Skinner, Sienna Guillory, Reece Shearsmith.
THE PLOT: It’s a droog-eat-dog world when we first meet Tom Hiddleston’s Dr. Robert Laing, reduced to living off his questionable wits after the experimental high-rise community he’s moved into goes feral. From the very poor at the bottom to the very wealthy up in the penthouses, not even the great architect behind it all (Jeremy Irons) is able to maintain any kind of law and order once the water, food and electricity dries up and the crazy kicks off.
Pretty soon, it’s cabin fever, on every level. A towering infernal, if you’ll excuse the genius pun.
As various characters at various points of insanity battle for control or simply some food, shelter or violent sex, our anti-hero tries to remain calm. Even when he’s clubbing a man to death in the abandoned supermarket, as the two desperate scavengers fight over that last tin of grey paint.
THE VERDICT: There’s something about a movie that simply doesn’t try to please a mainstream audience that you have to admire.
Think of Lenny Abrahamson’s ‘Frank’, of Terry Gilliam’s ‘Tideland’, Richard Ayoade’s ‘The Double’, or the entire works of Gasper Noé. It would be so easy for these filmmakers to give us kittens in a boot. Instead, they’re rather give you a boot being slowly forced into a kitten. Whilst Scott Walker goes full banshee on the soundtrack and the lighting technician has a stroke.
‘High-Rise’ is one such film.
It’s all very dark and disturbing, as you would expect from the pen of J.G. Ballard (the late British sci-fi novelist who also gave us Crash and The Drowned World), and the director, Ben Wheatley (the acclaimed British filmmaker who gave us ‘Kill List’ and ‘Sightseers’, amongst others).
Producer Jeremy Thomas – who became friends with Ballard after steering David Cronenberg’s 1996 adaptation of ‘Crash’ – had spent almost ten years trying to get High-Rise to the big screen before Wheatley and his screenwriter wife Amy Jump decided that J.G.’s 1975 novel might just be the challenge they were looking for after 2013’s period romp, ‘A Field In England’.
The resulting film has divided critics somewhat, being a stubbornly difficult watch. Dave Fanning hated it with a passion – which some smart people will take as a recommendation.
Gotta say, it eventually bugged the s**t out of me too. Which some idiots will take as a recommendation.
RATING: 2/5
Review by Paul Byrne