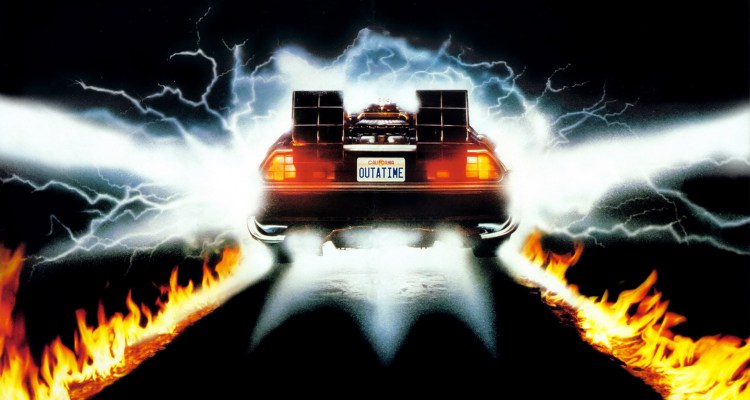 Happy birthday BACK TO THE FUTURE!

BACK TO THE FUTURE, the classic 80s time travel movie starring Michael J. Fox and Christopher Lloyd, turns 30 today. Released in US cinemas on July 3rd 1985, BACK TO THE FUTURE was beloved at the time, and has gone on to become a cult classic.

To celebrate BACK TO THE FUTURE’s momentous birthday, we pulled together some facts to remind you how great the movie truly is.

1. Musings
Robert Zemeckis and Bob Gale wrote the script after Gale mused upon whether he would have befriended his father if they attended school together. This was flipped in the film, as Marty finds his teenage mother has a crush on him when he travels to 1955, but the concept is one of the main plotlines of the finished film.

2. Casting
Michael J. Fox was the first choice to play Marty McFly, but he was caught up filming the TV show FAMILY TIES. Eric Stoltz was cast instead, but Zemeckis felt he was wrong for the role, a thought which Stoltz himself echoed in a phone call to legendary director Peter Bogdanovich. When Fox’s schedule suddenly opened up, the decision was taken to recast and reshoot the film, even though it added approximately $3 million to the budget. The decision was the right one though, as Fox embodies McFly as a character.

3. Presidential Fan
In 1955, Doc Brown is shocked to hear that Ronald Regan is President of the US in 1985, as at the time, Regan was an actor. Apparently Ronald Reagan was so amused by this that he had the projectionist stop and replay the scene. He also made a direct reference of the film in his 1986 State of the Union address: ‘As they said in the film BACK TO THE FUTURE; “Where we’re going, we don’t need roads.”’

4. Product Placement
In early drafts of the script, the time travel machine was actually going to be in a fridge. This idea was scrapped as the filmmakers were afraid that fans would climb into their own fridges and get hurt. In the final film, the time travel machine is a DeLorean car – manufactured in Northern Ireland! – and writers Bob Gale and Robert Zemeckis got a fan letter from John DeLorean after the film’s release, thanking them for using his car in the movie.

5. Nostalgia
Crispin Glover, who plays Mary’s father in BACK TO THE FUTURE, says he has only seen the film once, shortly after its release. Christopher Lloyd however, has stated that when he occasionally stumbles across a BACK TO THE FUTURE film while channel surfing, he will often sit and watch it. Aww.

6. Running Gag
The script didn’t call for Marty to repeatedly bang his head on the gull-wing door of the DeLorean; this was improvised during filming as the door mechanism became faulty. Today, it is one of the many beloved gags in the film.

7. Debut
Billy Zane makes his first on-screen appearance in BACK TO THE FUTURE, as ‘Match’ one of Biff’s cronies. That’s an impressive first film to have on the CV!

8. Pirates!
In the original script, Doc Brown and Marty sell bootleg videos to make the money to build the time machine. This plot point was removed at Universal Pictures’ request, as they did not want to be seen as promoting movie piracy. We see their point!

9. What’s in a Name!?
Universal Pictures head Sid Sheinberg did not like the title BACK TO THE FUTURE; in a memo to Robert Zemeckis, he said that the title should be changed to SPACEMAN FROM PLUTO tying in with the Marty-as-alien jokes in the film. Sheinberg was persuaded to change his mind by a response memo from Steven Spielberg, which thanked him for sending a wonderful ‘joke memo’, and that everyone got a kick out of it. Sheinberg, too proud to admit he was serious, gave in to letting the film keep its fantastic title. Phew!

10. Approval rating!
When BACK TO THE FUTURE was previewed for a test audience, the final DeLorean-in-flight shot was not finished, and the final few minutes of the film were in black and white. It didn’t matter, as the audience roared in approval of the final scene anyway. Those were people with good taste!

Happy birthday BACK TO THE FUTURE, and thanks for the memories!