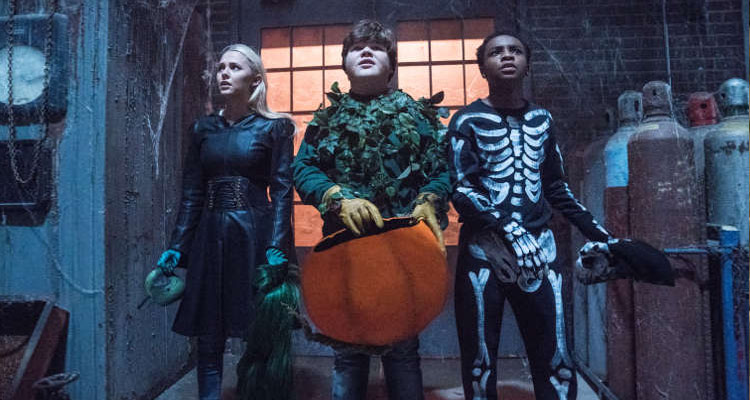 The Plot: Teenager Sarah (Madison Iseman) is an aspiring writer who has got writer’s block. When not thinking of something to write, she babysits her younger brother Sonny (Jeremy Ray Taylor), who collects junk along with friend Sam (Caleel Harris). When they search an old house, they come across ventriloquist’s dummy Slappy (Mick Wingert), who comes alive after they speak an incantation. Slappy charms his way into their house, but is soon up to his old tricks again. With Halloween about to happen, the demon doll sets out to bring it to very real life via Goosebumps author R.L. Stine’s (Jack Black) first unfinished book – Haunted Halloween…

The Verdict: With Christmas already encroaching on Hallowe’en’s turf (what is with that?), it’s time for a spooky family-friendly treat before the ghoulish event itself. 2015’s Goosebumps was an imaginative smalltown monster romp, which played into that old chestnut about an author’s characters coming to life. It did so with style and wit, even being meta enough to include actual author R.L. Stine as portrayed by the amiable Jack Black. It did well enough at the box office to warrant a sequel and here it is with Haunted Halloween.

There’s less of Black this time around, as he makes a late entrance into the film. It looks like it’s heading in a certain direction at this point, but credit to director Ari Sandel for making it less about Stine and more about the trio of resourceful teenagers. Sandel also takes the single best element of its predecessor – Slappy – and bumps him up into a lead role. The more chatty and mischievous cousin of Annabelle, Slappy is a devilish delight who drives the plot (without brakes) into a mass of mayhem as he turns masks, costumes and pumpkins into the real thing. All of which is PG-friendly of course, given a cartoonish edge by Sony’s (severed?) animation arm.

The most amusing sequence involves confectionery –  Sonny and Sam being attacked by toothy gummi bears. That’s nightmarish enough to make you look at gummi bears differently, in the same way that Young Sherlock Holmes did with pastries. Eagle-eyed film buffs should spot a reference to a famous French short film, which Stine (the character) claims he created first (wrong). He also at one point thinks he was rather cliched in his early writing. An unfortunate reference, as that translates into the film too.

Goosebumps 2: Haunted Halloween is a bit cliched, in that it’s content to just have monsters on the rampage in a small town again. Sandel plays it safe, not messing with the mad scientist formula that worked the first time around. That’s fine for this film, which is entertaining and swift enough not to overstay its welcome. If there are to be more Goosebumps films though, it might be necessary to push and stretch this concept more to see how far it can go. For now though, this acceptable sequel should delight children and adults alike.