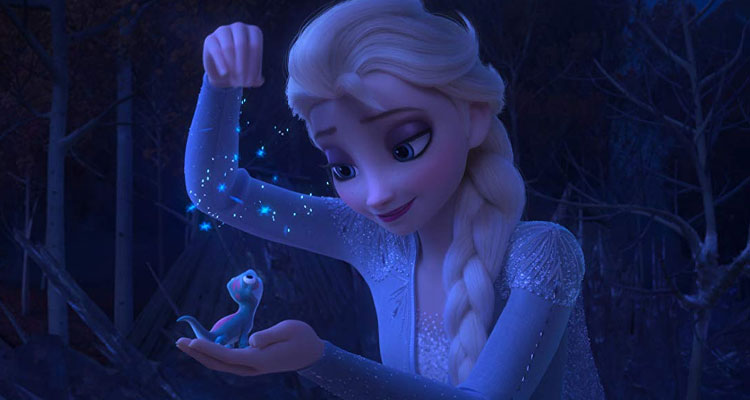 The Plot: All is well in the kingdom of Arendelle. Elsa (Idina Menzel) and her sister Anna (Kristen Bell) are now closer than ever. Kristoff (Jonathan Groff) is waiting for the right moment to propose to Anna. Olaf (Josh Gad) is enjoying his permanent iceman status in the autumnal weather. Something is coming to disrupt that though. Elsa hears a voice calling her from the forest, where an old conflict needs to be resolved in order to prevent further conflict. The source of her powers might lie within so the quartet, along with Sven, set off into the unknown…

The Verdict: Until just recently, Frozen was the highest-grossing animated film of all time. Disney’s own The Lion King remake now sits on that throne, though some may argue how animated it is. How does Disney make a sequel to such a box-office success and still retain a certain level of quality control? The answer is to do what all good sequels do – expand out the environment, develop the characters more, deliver audience-pleasing moments and refine the visual and aural delivery to impressive new heights. While this male middle-aged reviewer admits to not being the target audience for this film and decided to Let It Go and watch the original only recently, there is something in the air about this smarter sequel that propels it directly forward into the hearts and minds of its audience.

The screenplay by co-director Jennifer Lee once again puts Elsa front and centre. Whereas her icy powers in the previous film were out-of-control, she’s now learned to control her emotions and hence her powers. She ventures deep into the forest with her friends to find out more about the fate of her late parents and discovers that there’s an uneasy balance of power that could go either way. There’s more of a Tolkienesque atmosphere about the plot this time around, with the gorgeously rendered autumnal environments like something out of Rivendell. That extends to the new creature designs, which involve a more elemental quality through water, air and rock. Surprisingly for a mainstream Disney animated film, there’s a strong ecological message – just like Tolkien.

The songs are equally good this time around, with Idina Menzel delivering another belter of a power ballad with Into The Unknown. While not as catchy as Let It Go, it’s darker and more relevant to the development of this particular plot. The animation during this powerful sequence is nothing short of breath-taking. Each year, Disney’s animation becomes almost photo-real, from ripples in water to floating leaves to even the slight sparkles of ice on Olaf. It makes up for some of the clunkier elements of the plot. Anna is still a very dry character and not that engaging, while Kristoff is a dull lunkheaded hunk who can’t read Anna’s emotions. More interesting is Olaf, who gets the best lines and the most imaginative use of his own snowy powers, aided by Josh God’s enthusiastic voice performance.

Frozen II is pretty much critic-proof anyway. After a five year wait for a sequel, there’s no doubt in anyone’s mind that it will be a massive success. It deserves success on its own merits for simply being darker (but not too dark) and taking the story to a more involving place than its predecessor. It’s not a case of defrosting a sequel for more money, but of making a sequel that’s relevant for a built-in audience. Even this dubious reviewer got swept up in it. Frozen II may not hit the dizzy animated heights of Pixar, but it’s likely to enthrall audiences once more.