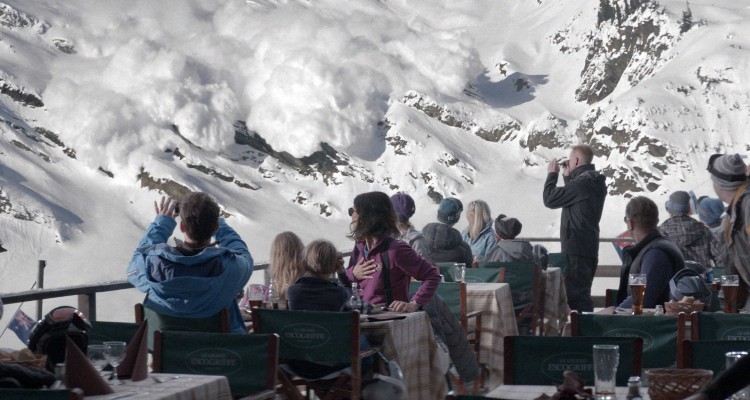 THE PLOT: Not long into their skiing holiday, a family find themselves staring at potential disaster in the shape of an avalanche. Although physical disaster is avoided, it is not long before the family’s patriarch Tomas (Johannes Bah Kuhnke) finds his reaction to potential danger is under scrutiny, and the family dynamic is shaken to its core.

THE VERDICT: FORCE MAJEURE is an interesting film, which throws human instinct under the microscope, and leaves a man struggling to make up for and explain his actions during disaster. Johannes Bah Kuhnke does well in the leading role and, although his actions may sometimes he reprehensible, Kuhnke always manages to make Tomas’s actions feel honest. Lisa Loven Kongsli makes Ebba feel like a real person, whose actions, albeit not as dramatic as her husband’s, are no less questionable, and it is this dynamic and the feel of passive aggression that hangs over the film. The rest of the cast is made up of Vincent Wettergren, Clara Wettergren, Kristofer Hivju, Fanni Metelius and Karin Myrenberg.

Ruben Östlund’s story is an interesting one, but it is certainly not the tale of a man who’d rather save his iPhone than his family, as it has been touted. Instead,FORCE MAJEURE is the story of how the fallout of one simple event can change the dynamic of an entire group of people, before spilling over into the lives of those around them. By placing the family at a ski resort – a resort they are staying at for several more days – this gives the feeling of the family being trapped and, instead of talking about their issues together, allow them to boil over into passive aggression and resentment.

As director, Ruben Östlund makesFORCE MAJEURE a drama about a family, but also allows the characters’ resentments with one another to bubble up. As well as this, there is the feel that all this is the lead up to midlife crises for the heads of the family, but that’s another film for another time. The film is beautifully shot, but suffers through some drawn out pacing and seemingly endless arguments that are never resolved. This detracts from the energy of the film, as does continuous screaming from the child actors, which grates after a while.

In all, FORCE MAJEURE has an interesting central concept that gets a little lost through endless arguments, drawn out pacing and some unnecessary scenes. That said, the film is beautifully shot and, for the most part, feels honest in its portrayal of a family on the brink of imploding.