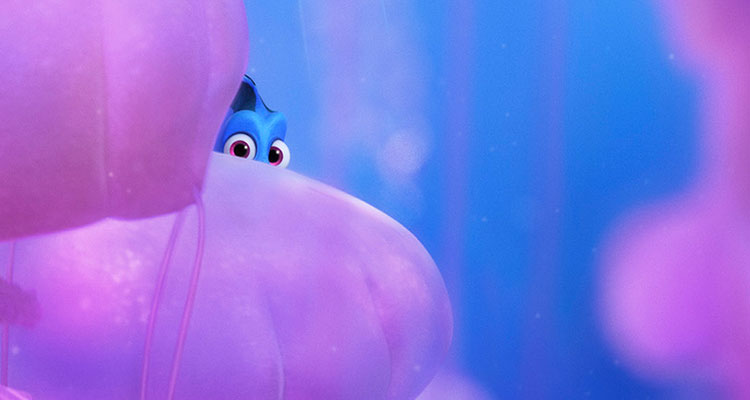 THE PLOT: Having helped Marlin be reunited with his little tyke, Nemo, we jump to one year later, and Dory suddenly remembers that she’s lost someone too. Namely, her parents, having been swept away from them by the undercurrent whilst still just a young ‘un learning how to find her way home by following the trail of shells. That short-term memory loss isn’t helping Dory much now either, as she tries to piece together the fragments of her time with ma and pa, but Marlin and Nemo are determined to help. Even when they end up bouncing around the walls of a Marine Life Institute aquatic rehab centre.

THE VERDICT: Everything has pretty much come up Hunky Dory for Andrew Stanton with this likeable sequel to 2003’s record-breaking and heart-melting Finding Nemo.

There was quite a bit riding on this little fishy, truth be told. Stanton has suffered a mighty ego and box-office blow with the unfair flop of his live-action debut, John Carter (2012), whilst Pixar – The Beatles of animation – have somehow gotten to the point where a new movie can fail horribly at the box-office, and, worse, no one really cares. Did anyone like The Good Dinosaur?

Still, many of those sitting down to Finding Dory won’t be thinking about the engine-room politics. They’ll be thinking about poor Dory, and her wacky search for the worried parents she left behind. Heartstrings are tugged, and funny bones tickled, along the way, even if it did, at times, pack enough anxiety to fill two After Hours. Fans of the original won’t be disappointed.