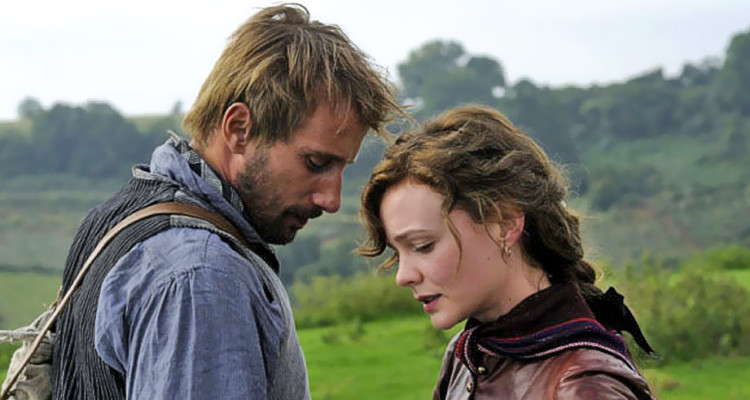 Far From The Madding Crowd

THE PLOT: In Victorian England, the headstrong and fiercely independent Bathsheba Everdene (Carey Mullugan) attracts, and has to choose between three very different suitors; Gabriel Oak (Mattias Schoenaerts), William Boldwood (Michael Sheen) and Frank Troy (Tom Sturridge). Bathsheba’s decision is not an easy one for her to make, and has long lasting consequences.

THE VERDICT: Based on Thomas Hardy’s classic novel, FAR FROM THE MADDING CROWD follows in the footsteps of the 1967 film starring Julie Christie and Terrence Stamp. In this incarnation, Carey Mulligan takes the lead role, and does surprisingly well as the feisty Bathsheba, bringing a fire and gutsiness to the character that we have rarely seen from the actress in the past.

Matthias Schoenaerts is not particularly convincing as a West Country farmer, but what he lacks in accent, he makes up for in energy, making Gabriel Oak a watchful and kind man. As well as this, he and Mulligan have great chemistry on screen together. Michael Sheen has a smaller role as William Boldwood, an established man who has a deep affection for Bathsheba, but he delivers a fantastically nuanced performance, and easily commands the screen. Tom Sturridge rounds out the love triangle (love square!?) as Sergeant Frank Troy, a man who falls in love with Bathsheba as soon as he lays eyes on her. Sturridge does well in playing a cad, but there are times when his character feels like less of a force of nature, and more of an petulant child. Juno Temple turns up briefly as Fanny Robbin, who is more of a catalyst than a character.

David Nicholls’ screenplay pulls the romance of the film to the fore, while allowing the story space for characters to become tortured, heartbroken or loyal. The dialogue is economical, but carefully written, and the screenplay is evenly paced, giving us a chance to get to know enough about these characters to care about them.

Thomas Vinterberg directs carefully, giving the film a tense and romantic feel, and coaxing strong performances from his actors, making the characters vulnerable, loyal, stubborn and as rounded as we could hope for. As well as this, the film plays with the notion that choosing the partner that excites us, is not necessarily the path to true and ever lasting happiness. There are times when the film takes seemingly dramatic turns, and seems to run out of steam; it soon gains its footing back, but never quite recovers from the narrative wobbles. Vinterberg is aided by the beautiful cinematography from Charlotte Bruus Christensen, which plays with colour and light, making the film at once ethereal and utterly grounded.

In all, FAR FROM THE MADDING CROWD is a strong adaptation of a classic novel. Some of the cast do better than others; Mulligan brings some much needed strength to the character, Schoenaerts shines as the quiet but loyal Oak, but both are let down by Sturridge’s superficial and slight Troy. Vinterberg shines a light on the dichotomies of love, and brings Hardy’s romantic drama to the screen with grace and style.