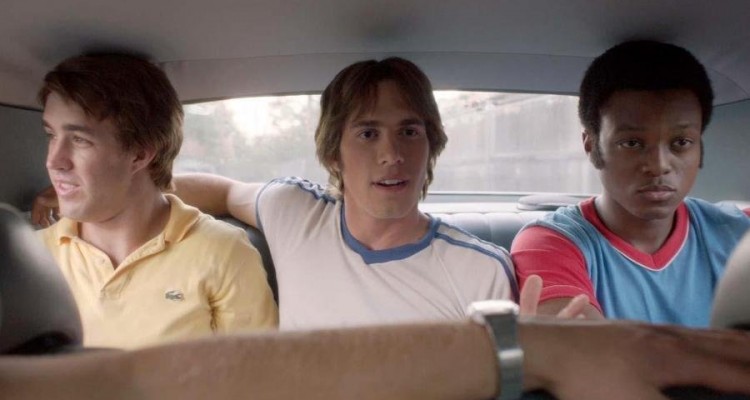 EVERYBODY WANTS SOME!! (USA/15A/117mins)
Directed by Richard Linklater. Starring Blake Jenner, Juston Street, Ryan Guzman, Tyler Hoechlin, Wyatt Russell.
THE PLOT: Jake (Blake Jenner) arrives at college in September 1980, the weekend before classes start. For the last three days of his summer freedom, Jake spends his time getting to know his housemates and fellow baseball team members, trying out almost every bar in town, and figuring out the best way to approach a girl he has a crush on.
THE VERDICT: According to writer director Richard Linklater, ‘Everybody Wants Some!!’ is not only a follow up to his 1993 film ‘Dazed and Confused’ – which takes place in a high school – but a follow up to his hugely successful film ‘Boyhood’, since that film ends with the title character heading off to college. Whatever the case, ‘Everybody Wants Some!!’ is a nostalgic celebration of those last days of summer, with a kick ass soundtrack, but not a lot happening in terms of story.
Richard Linklater populated his cast of college kids with Blake Jenner, Juston Street, Ryan Guzman, Tyler Hoechlin, Wyatt Russell, Glen Powell, Temple Baker, J. Quinton Johnson, Will Brittain and Zoey Deutch as the only notable female character in the film. All of the cast do well with their roles, making these superficially smart kids obviously lacking in real world experience as they spout Walt Whitman and Carl Sagan quotes at one another, smoke weed and get themselves thrown out of bars. The trouble is that the script never develops any of the characters properly, does not give the film an over arching narrative and, since the film takes place in a short space of time, never allows any of them to change or grow; they are arrogant at the start and, on the first day of class, little has changed.
Richard Linklater’s screenplay for the film seems to have been less of a script than a loosely structured story idea and this is the film’s major failing. So many of the characters have throwaway moments that could have become the main narrative of the film, but this is never allowed to happen. Instead, we drift through one drunken weekend with a bunch of sexist, misogynistic and often idiotic college students – most of whom are male – and although it is engaging to spend time with them to begin with, the film runs out of steam when it becomes obvious that the main narrative of the film is get drunk and party all night. As well as this, there are very few female characters in the film; Zoey Deutsch as Beverley gets a couple of good moments, but the rest of the women seem simply to be set dressing, there to be seduced and discarded.
As director Richard Linklater obviously has fun being in the nostalgic world of 1980s American colleges, and although there are times when the film touches on deeper issues, these are quickly discarded. The pacing is fine – each of the three days passes fairly quickly – but without a reason to spend time with these college kids, all the great music, 80s dancing and strong costumes cannot make the film as engaging as it should be.
In all, it is fun to spend time with the college age kids at the heart of ‘Everybody Wants Some!!’ but there are anachronistic turns of phrase that feel wrong, the cast are never given a chance to develop their characters and the narrative arc of the film is missing. On the positive side, the characters feel real and it is fun to spend time in their world, but they would have benefitted from having a strong narrative arc to work with.
RATING: 3/5
Review by Brogen Hayes