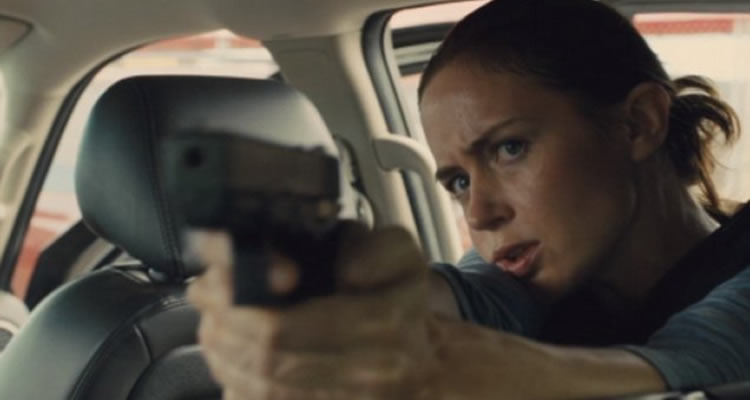 Emily Blunt is no stranger to playing tough, no-nonsense women, and although her character in Denis Villeneuve’s ‘Sicario’ – released in Irish cinemas this week – is an FBI Agent in a male-dominated profession, she shows wonderful vulnerability and weakness. The film follows Kate Macer (Blunt), and FBI Agent who, after a horrific and gruesome discovery at a house in Arizona, is drafted in with the DEA to bring down a Mexican cartel on both sides of the border.

Movies.ie sat down with Emily Blunt at the Cannes Film Festival earlier this year to find out just how much preparation she needed for the role, working with Benicio Del Toro for the second time after ‘The Wolfman’ and what it was like to work with director Denis Villeneuve.

Kate Macer is a strong but rounded character, how did you prepare for the role?
Emily Blunt: The FBI Agents who I spoke to just sound like me. They sound like normal girls and they go home and watch DOWNTON ABBEY; they are really great girls. You definitely want to have a beer with them. I found it interesting to get under the skin of what it is to be a female cop and what that costs you; how it affects your marriage, how it affects how you sleep at night, and how you cope with the men working alongside you. It was just really interesting hearing the point of view, and quite humbling actually.

What did these FBI Agents tell you about procedure?
EB: I only spoke to them on the phone, so there wasn’t a physical interaction where they showed me how to stand and hold a gun. I had worked with guns before so I felt pretty competent, then I had some training once I got to New Mexico where we shot it. I worked with the DEA guys there just to learn the choreography of the SWAT Team and how that works, and how incredibly choreographed it is. It’s very intricate and almost like a dance. They are incredibly efficient, the FBI, and it was really good to see how they work and the restraints of being in that job and that’s part of why the character struggles so much. That was helpful for me, to learn the restraint and composure that these officers have.

When you were cast were you aware that screenwriter Taylor Sheridan had been pressured into rewriting the character for a male actor?
EB: I just heard about it from our director once I’d signed on. I get asked a lot about ‘You play a lot of tough female roles’, but I don’t really see them as tough, I think there are plenty of strong women out there and I don’t think they can be compartmentalised as being one thing. I found this character strangely quite damaged and quite vulnerable, and she’s struggling within this realm of being a female cop, and certainly with the morally questionable things that she’s having to experience with these guts. It’s not safe, so you see this girl going through the worst three days of her life. She’s trying to maintain face for most of it. I didn’t really think about adjusting it to make it more masculine or something; I think that she’s trying to survive in a predominantly male driven profession.

You worked with another Canadian, Jean-Mark Vallée, on THE YOUNG VICTORIA…
EB: They’re very competitive, we don’t like to bring up Jean-Mark’s name! [laughs] We would actually send each other pictures of the two of use together, then me and Jean-Marc, then me and Denis!

…Have you noticed a difference in how Canadian directors work?
EB: I think there’s a different sensibility. I think both of the directors that I have worked with have a sense of nuance and a free spirited way of a scene coming together; very collaborative. They find the beauty in darkness, and I think that’s the similarity.

What is Denis Villeneuve’s touch as a filmmaker?
EB: The thing that struck me most, and the thing that I have most respect for it Denis’ humility and ability to say ‘I don’t know, let me sleep on it’, and he would go and have a sleepless night, and have the answer in the morning. I think that that kind of openness is very present in his films because he allows for you to carve out space for yourself and doesn’t stifle you as an actor. For me, that was what I loved about working with him. I think he is that very fine line of visually being incredibly clever – along with [cinematographer] Roger Deakins, obviously – but great with actors, which is an unusual combination. It’s usually one or the other.

The film has a lot of action, but the final scene with Benicio Del Toro is very powerful. How did you prepare for this?
EB: I think that scene changed from what it was originally on the page. I remember the three of us sitting down and talking through all of the options, and what was the most powerful thing. I think I found it, as we sat there and talked about it, I suddenly thought that I was going to cry. I think it’s quite an emotional scene, and I didn’t expect it to be that; the stoicism finally get cracked in half. You know when a scene works because the air sort of shifts in the room and it’s what you live for, who you do this job is those moments.

What was it like shooting with a team of mostly male cast and crew?
EB: It’s something that I have become quite used to because I think that happens quite a lot in films; there aren’t a ton of chicks around. It was great; I had known Benicio for eight years – we did a film together ages ago – and Josh I knew socially, so it really was such a pleasure to be around them and work with them. I remember for such a dark film, it was a very very happy set, a giggly, funny set to be on.

‘Sicario’ is released in Irish cinemas on October 8th 2015