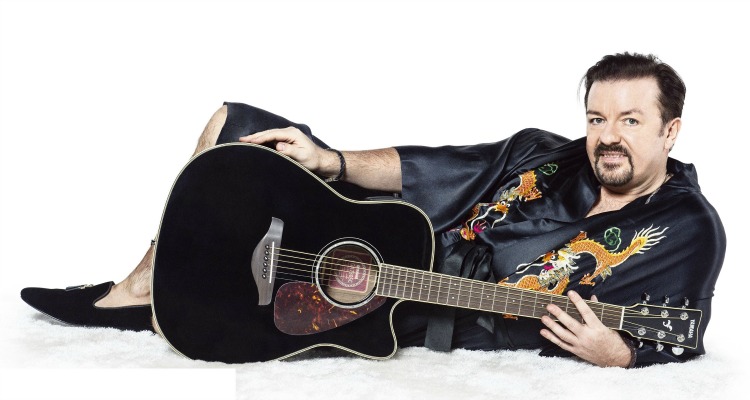 David Brent: Life on the Road

DAVID BRENT: LIFE ON THE ROAD (UK/16/95mins)
Directed by Ricky Gervais. Starring Ricky Gervais, Ben Bailey Smith, Jo Hartley, Tom Basden, Andrew Brooke, Tom Bennett, Mandeep Dhillon.
THE PLOT: “That was then, this is now,” states former reality TV star and now sanitary salesman David Brent (Gervais), but, in truth, it’s the same as it ever was for this not-exactly-beautiful loser. He may have moved on from being Slough’s no.1 paper merchant manager, but The Thick White Duke is more determined than ever to fulfil his teenage dream of becoming a rock star, throwing a few more mortgages at a wide-eyed backing band and an upcoming young rapper (Smith), using the latter’s blatant promise as an alibi to go on the road. And dominate the mic.
As the tour progresses, the divide between Brent and the rest of the band – and reality – begins to widen, with the distinct lack of screaming fans ringing ever louder in their ears…
THE VERDICT: Once again exploring that fine line between dreamer and deluded eejit, Ricky Gervais’ most famous comic creation returns 15 years after ‘The Office’ first broke through – and he’s possibly even more of a sad-sack these days. The comic device of a no-hope band going on tour has become something of a cliche in itself, although the results here are probably more ‘Anvil: The Story Of Anvil’ than the original of the species, ‘This Is Spinal Tap’, with the empty rock posturing in front of tiny and indifferent pub audiences offset by the gradual painting of Brent as someone who just needs to be loved. Or even just liked.
Brent is the sort of nervous under-achieving braggard who’s been having a mid-life crisis from about the age of 15, so, as those crippling 50s approach, a real dry-mouth desperation has kicked in. Like so many, many would-be stars out there, David Brent is a Bob Parr who never had his Mr Incredible years, and is beginning to feel ever so slightly lost and desperate. The man is drowning, and he knows that, for many people, it’s very tempting not to throw him a lifebuoy. Even if it’s right beside you.
To offset all that cringe-inducing comedy, Gervais ultimately aims for a little tenderness – as, not long before the closing credits, the band gradually grow to like him, and that sweetheart back in the office finally breaks through his slapstick bravado. Such a happy ending doesn’t quite ring true though.
At its best, ‘David Brent: Life On The Road’ is still very much another Slough day at the office, with the biggest laughs coming from that huge, gaping black hole between the dream and the reality. It’s a gap best personified here by Brent finally getting two women to come back to his hotel room, only for this particular San and Tray to ravish his mini-bar rather than his body.
We’ve all been there…
RATING: 4/5
Review by Paul Byrne