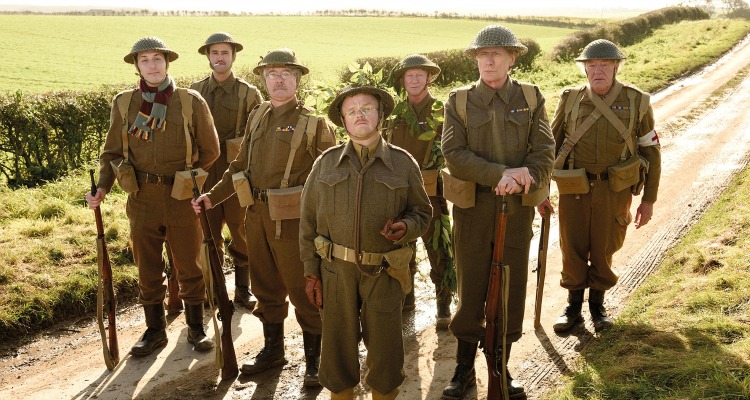 DAD’S ARMY (UK/PG/100mins)
Directed by Oliver Parker. Starring Bill Nighy, Catherine Zeta Jones, Toby Jones, Tom Courtenay, Michael Gambon, Annette Crosbie, Felicity Montagu.
THE PLOT: In 1944, at the height of World War II, the British coast is secured by the Home Guard; a group of volunteers ineligible for active duty due to age or health reasons. In the town of Walmington-on-Sea, Captain Mainwaring (Toby Jones) runs a motley crew of a Home Guard who, when a journalist comes to town to write an article on the squad, all become enamoured with her. Meanwhile, news of a German spy in the town causes panic.
THE VERDICT: For those not in the know, ‘Dad’s Army’ is the second big screen version of a British TV sitcom of the same name. The show ran on the BBC from 1968 to 1977 and focused on the fact that the Home Guard, while willing, were completely under equipped and under prepared to fight off a German invasion. ‘Dad’s Army’ first came to the big screen in 1971 and focused on the Walmington-on-Sea branch of the Home Guard being formed, whereas this new version picks of toward the end of World War II, with a new threat invading the town.
The cast of the film is stellar, and this is a testament to the high regard in which the film is held. ‘Dad’s Army’ as gathered together some of the best British and irish actors working today, including Toby Jones, Michael Gambon, Bill Nighy, Catherine Zeta Jones, Tom Courtenay, Mark Gatiss, Anette Crosbie and Felicity Montagu, whose turn as the overbearing Mrs Mainwaring makes a nice change of pace for the actress from her most famous role as Alan Partridge’s long suffering assistant Lynn. The cast do their best with what they are given, but none of them seem to be given a chance to really throw themselves into their roles, with the exception of Michael Gambon, who makes Private Godfrey bewildered and endearing.
Hamish McColl’s screenplay is one of the main reasons that ‘Dad’s Army’ doesn’t quite work. In trying to stretch out the show’s 30 minute running time to a feature length film, there is much time spent on making the men of the Home Guard even more like bumbling idiots – this time as they fawn over Catherine Zeta-Jones’ character Rose – and the women into screeching harpies. Surely we were past this!? There is never even an attempt to hide the fact that Rose is the German spy, which leads to many sequences in the film becoming incredibly frustrating.
Director Oliver Parker – whose past work includes the St Trinian’s films and Johnny English Reborn – never quite manages to get the tone or the pacing of the film right, which scenes switching from farce to tense drama halfway through, and there never seeming to be sense of urgency in the film as a while. As well as this, the film is filled with awkward attempts at humour, double entendres and slapstick comedy that quickly becomes tiresome.
In all, ‘Dad’s Army’ tries to pay homage to a classic British sitcom and fails. The cast struggle to make the film come alive, but they are fighting against an uninspired script and a feeling of jaded familiarity.
RATING: 2/5
Review by Brogen Hayes