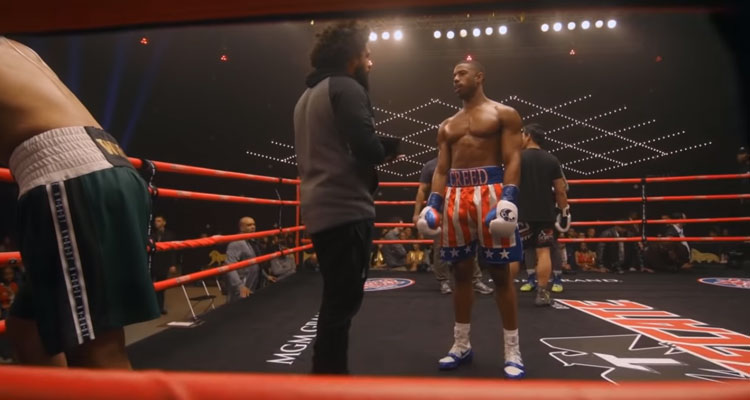 In short: Packs a punch

The Plot: Now the world heavyweight boxing champion, Adonis (Michael B. Jordan) takes time off to concentrate on furthering his relationship with Bianca (Tessa Thompson). The weight of his late father Apollo’s legacy is still on his shoulders, kept in check by the more practical Rocky (Sylvester Stallone). That’s about to put to the test by the re-appearance of Ivan Drago (Dolph Lundgren), who killed Apollo in the ring but was later defeated by Rocky. Ivan’s career hit rock bottom following this defeat. Now he wants to restore his family’s honour by having his son Viktor (Florian Munteanu) face off against Adonis. Viktor is no pushover. He’s taller, has nothing to lose and everything to gain. Adonis has everything to lose. This battle royale proves too tempting to resist, despite Rocky’s concerns…

The Verdict: Ryan Coogler’s Creed was a knock-out in many respects. It followed in the fleet-footed moves of the Rocky saga, bringing the great champ back but also ensuring that it was about the passing of the torch to the next generation. It was a box-office success and scored Sylvester Stallone a Best Supporting Actor nomination – which he was arguably robbed of). The story of Adonis and Rocky continues with Creed II, a sequel that pumps up its predecessor’s themes for an almighty legacy slugfest. Think of it as a continuation of Rocky IV but from a different perspective. Yes, it’s an American vs a Russian again. It’s as if the Cold War was paused – not unexpected in the current political climate.

With Coogler stepping aside on directorial duties to instead focus on the cinematic landmark that is Black Panther, he handed the boxing gloves to Steven Caple Jr. He had only one other feature film to his name before Creed II, which might prompt concerns that the quality could dip. However, it’s worth bearing in mind that Coogler was himself a second-time director on Creed. Staying on as an executive producer, Coogler has ensured a certain level of narrative continuity but also allowed Caple Jr. to branch out in his own direction. This is most evident in the bruising, tense and well-edited face-off between Adonis and Viktor. Where you’re at the top of the mountain, the only way is down. Adonis doesn’t know what he’s dealing with when it comes to Viktor. He’s a lean, mean (killing?) machine whose father wants him to break Adonis just like he did with Apollo.

Good boxing films aren’t really about boxing. It’s what happens offscreen to the characters we care about that matters the most. The crucial decisions they make, which could have far-reaching consequences for their lives. Caple Jr. scores points in the directorial ring by developing the themes of family, responsibility to loved ones and the almost crushing weight of legacy. Amid all the bombast of the face-off, he finds time to focus on the smaller moments like Adonis’ awkward proposal to Bianca or Rocky talking by Adrian’s grave. There’s a lot of soul, guts and heart here, even if there are some miss-steps along the way.

There’s less a sense of time passing and that even champions can be felled by time – something which was so important in the first film. The focus is now more on the dependency between Adonis and Rocky, which is fine but less involving than before. Boxing films are by their very nature predictable, but you can pretty much see where this is going early on and again half-way through. No major surprises then, with Caple Jr. playing it safe. However, there’s much to enjoy here, from Stallone’s lovely, quietly observed performance to Lundgren’s glower to Jordan’s grit and determination. Not quite a knock-out, but a solid one-two that packs a punch.