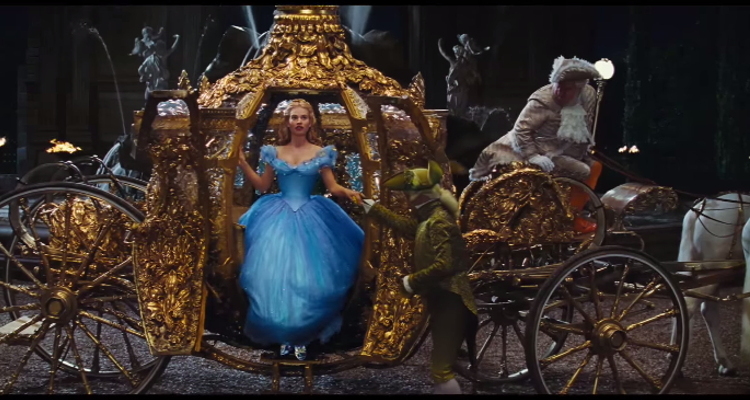 THE PLOT: Sticking close to the 1950 animated version of the classic fairytale, we first meet the young Ella (Eloise Webb) living the life of a Edouard Manet painting – namely, Le Dejeuner sur l’herbe – mixed with Beatrix Potter’s dreams. This is a fairytale childhood, and therefore, tragedy is just around the corner. When Ella’s mother is taken fatally ill, she advises her young daughter to “Have courage, and be kind”. It’s a mantra that the teenage Ella (James) clings to when her loving father (Chaplin) marries the hard-nosed widow Lady Tremaine (Blanchett, cackling like Sybil Fawlty, so, we know she’s evil). When her father fails to return from a business trip, Ella soon finds herself becoming servant and slave to her wicked stepmother and her rude and uncouth daughters, Drisella (McShera) and Anatasia (Grainger). Banished to the attic, Ella tries to have courage and be kind, but her struggle to remain so is interrupted when she happens upon a young man on a stag hunt. Convincing this stranger to call off the hunt, Cinderella (a name given to her by her stepsisters after a night sleeping too close to the fire) fails to recognise that the man she is so readily admonishing is none other than the Prince. And once departed, he is determined to find this mysterious girl again…

THE VERDICT: Shot in sweeping, swooning, glorious 2D, there’s something very familiar and comforting about Kenneth Branagh’s live-action take on the well-worn European folk tale that has been around at least as long as Rhodopis, the Greek slave girl, married the king of Egypt way back in 7 BC. Despite its long history, and its many, many tellings, for most people, Cinderella will always be the 1950s Walt Disney animated outing, and it’s undoubtedly the blueprint that our Ken is working from here. Which is all hokey-kokey with me, given just how classic a tale of oppresion and final act revenge Cinderella happens to be. And how much of an emotional punch can be wrung from this delicious tale of domestic abuse and very delayed gratification.

That’s not to put too arty a point on what is, bottom line, just a great big Cinemascopic kiss of a movie, from Blanchett’s wicked-but-troubled stepmother to Madden’s shining and shy Prince and lead Lily James’ wry beauty (somehow managing to suggest Cinderella may be good as gold but she’s also capable of being bold as brass). Think the truly enchanting Enchanted without the post-modern irony.

Sentimental, sugar-coated and soaked overnight in schmaltz, Cinderella is a triumph not because it tries to subvert its classic fairytale roots but because it embraces them. Spectacularly.

Review by Paul Byrne
5
A Triumph!