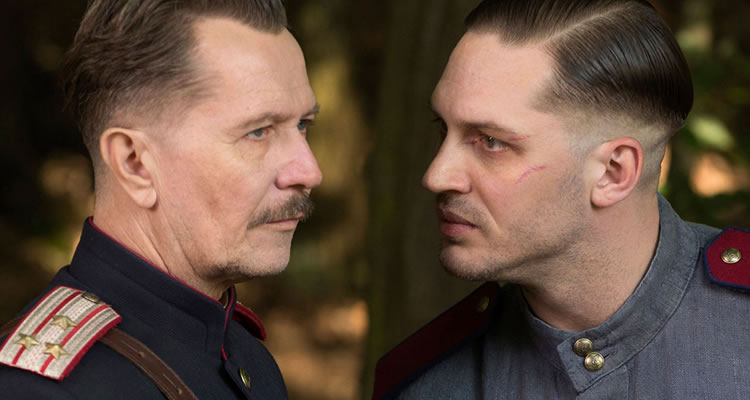 THE PLOT: In Soviet Russia, under the rule of Stalin, children are going missing, and turning up murdered. Since the government insists that Soviet Russia is paradise, and there can be no murder in paradise, disgraced military police officer Leo Demidov (Tom Hardy) takes it upon himself to get to the bottom of the murders.

THE VERDICT: On the surface, it seems like CHILD 44 has a decent plot for a thriller; and the cast made up of Hardy, Oldman, Kinnaman, Rapace and Considine only serves to further the idea that the film is not a silly film full of unnecessary plot and chewy accents. Sadly, this is not the case.

Hardy carries the film well enough but, like his turn as Bane in THE DARK KNIGHT RISES, his accent is chewy and over the top, and often intelligible… which doesn’t help matters. Rapace is fine as Leo’s manipulative wife Raisa, Charles Dance has a small role towards the end of the film, and Gary Oldman is a delight as the imposing General Mikhail Nesterov… Mostly because he gets to shout at Tom Hardy a lot, and who doesn’t enjoy Gary Oldman shouting!? Paddy Considine is woefully miscast as Vladimir Malevich, since he looks more like a Northern English schoolteacher than a Russian factory worker.

Screenwriter Richard Price, who has written for THE WIRE and, oddly, the video for Michael Jackson’s Bad, adapts Tom Rob Smith’s novel for the screen. It seems there is a lot going on in the novel, and none of this was cut for the sake of making the movie version of the story. As such, subplots that have little bearing on the title of the film take over for much of the running time, leaving the murder plot to be ignored for over an hour of the film’s 137 minute running time, before having it solved in a matter of moments.

Director Daniel Espinosa, whose 2010 film EASY MONEY is a terrific thriller, fails to keep CHILD 44 moving or interesting, leaving the film to get caught up in its own tangled subplots, subplots which it never fully escapes. This in turn means that actors like Oldman, Kinnaman and Considine are never truly given their moment in the spotlight, and end up feeling miscast or underused.

In all, CHILD 44 is a silly film about a silly story. All too easily, the film gets caught up in subplots that don’t actually matter, leaving the main story to fall by the wayside. Some of the accents in the film are utterly chewy and great actors are never given a chance to shine on screen. A missed opportunity indeed.