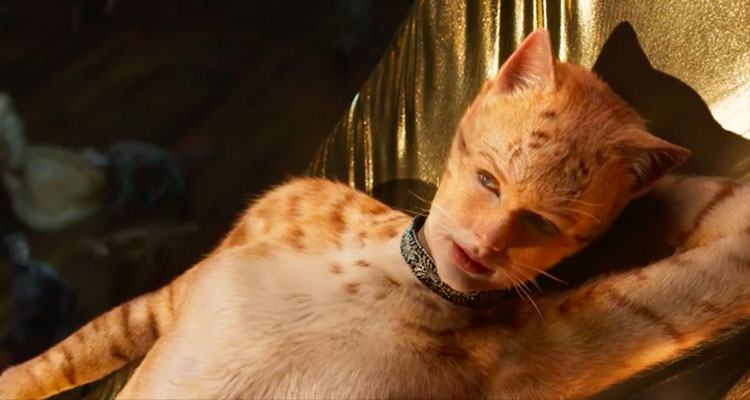 In short: A near cat-astrophe

The Plot: Stray cat Victoria (Francesca Howard) finds herself lost on the mean streets of London. She encounters a group of colourful cats known as The Jellicles. Lead by Old Deuteronomy (Judi Dench), the Jellicles are preparing for an important event: the Jellicle Ball. Old Deuteronomy will decide which of the cats is most deserving of ascending to the Heaviside Layer above and then return to the world below to start a new, better life. There’s stiff competition though, especially from smooth criminal Macavity (Idris Elba) who wants the position and will stop at nothing to get it…

The Verdict: After the initial trailer broke the internet during the summer, there was a lot of sniggering at what had been put together by director Tom Hooper for a screen version of hit musical Cats. It would be unfair to judge a film solely on the basis of a trailer though. Cats is one of those films you might have to see for yourself and decide whether it was worth it all in the end. Upon seeing the film, this reviewer was still trying to process it two hours later and form words into sentences more coherent than the bizarre plot that the film hangs on with its claws. It may be the strangest screen musical seen since the era of strange screen musicals – the 1980s, when the likes of Xanadu and the notoriously awful The Apple danced their way onto screens to the disbelief of stunned audiences.

To be fair, the film is based on Andrew Lloyd Webber’s 1981 stage musical which is the fourth-longest-running Broadway show and the sixth on the West End. The musical itself is based on T.S. Eliot’s 1939 book of poems Old Possum’s Book Of Practical Cats. Longevity doesn’t go hand-in-hand with failure. If the stage musical has lasted this long, it must be doing something good. Right? Perhaps – this reviewer hasn’t seen it. However, the film has to be judged on its own merits – of which there aren’t many unfortunately. For a film, the plot is just too whisker-thin to sustain itself to feature length. Hooper, who also directed the all-singing version of Lis Miserables in 2012, merely structures the film like a series of bad auditions for, wait for it, Cats Have Got Talent. The narrative is a loosely-assembled series of dance numbers, getting more elaborate and weirder as it goes along.

To give a flavour of that, the opening number includes miniature humanoid cats with actors having undergone CGI face and body lifts dancing with squeaky-voiced mice and then a whole parade of cockroaches in military formation. If that doesn’t confuse you enough, wait till you get to Taylor Swift’s overly slick dance sequence or gravel-voiced Ray Winstone’s cat Growltiger warbling away on a barge like he had a gobstopper in his mouth. Idris Elba’s supposed bad cat Macavity (he’s not that bad) has the ability to teleport for no apparent reason. It just gets stranger and stranger and stranger… until you realise that the Hooper doesn’t have anything else to offer here. It ends on what appears to be the start of the third act, but maybe just as well. 2.5 hours of this would be like cat claws on a blackboard.

There are some saving graces though. Jennifer Hudson, as unfortunate cat Grizabella, gives a showstopping, soulful rendition of the film’s best-known song Memory. It really is a thing of beauty and something to behold, for a brief moment almost making you forget what you’re watching through your fingers. The other songs, while not as strong, are decent and the choreography and production design are attention-grabbing. Try as it may though, Cats can’t shake off the fleas in its fur. It’s a near cat-astrophe which barely holds itself together and veers too closely to being a strange mix of a live action Broadway musical and a juvenile cartoon. It’s a curio more than anything else, a dare for audiences to attempt to like it. At least in this incarnation, it’s no Phantom Of The Opera… but one can imagine it becoming a future cult item among a small legion of fans like, er, Showgirls. See it if you dare.