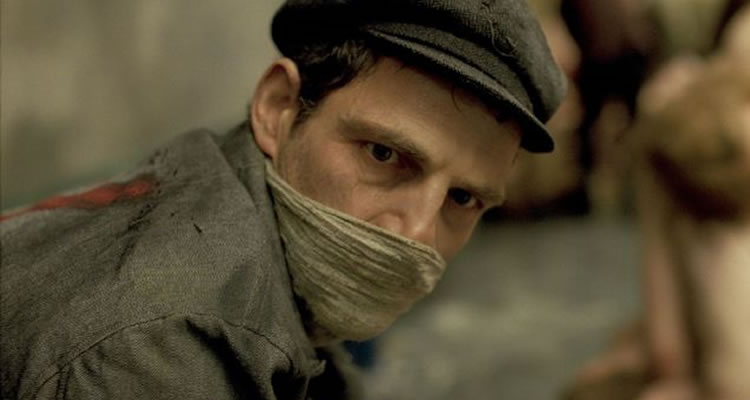 SON OF SAUL (Hungary/TBC/97mins)
Directed by László Nemes. Starring Géza Röhrig, Levente Molnár, Urs Rechn, Sándor Zsótér, Todd Charmont, Christian Harting and Kamil Dobrowolski.
THE PLOT: In the final days of Nazi Germany, a Hungarian prisoner at a concentration camp is tasked with clearing out the gas chambers, when he discovers a young boy still breathing. Determined to give the boy a proper burial, Saul (Géza Röhrig) sets out on a journey through the various factions of the camp looking first for the boy’s body, then for a rabbi who will help him in his mission.
THE VERDICT: SON OF SAUL is director László Nemes’ first feature length film, and is In Competition for the Palme D’or at the Cannes Film Festival. Although it would be easy to dismiss Son of Saul as a story that has been told before, there is something here that we have seldom, if ever seen before.
Shot in 1:1 aspect ratio, lead actor Géza Röhrig is in the shot for much of the 97 minute running time. The camera either focuses on his face or the back of his head as he moves through the camps – and occasionally, his point of view. This is a little disconcerting at first, but Röhrig‘s performance is so strong, and his face so expressive, that he carries the pain and fear of the film ably. The rest of the cast is made up of Levente Molnár, Urs Rechn, Sándor Zsótér, Todd Charmont, Christian Harting and Kamil Dobrowolski.
The story, written by László Nemes and Clara Royer, is a rather simple one, but Saul’s tenacity and determination to do what he set out to do, and his seeming ability to move around the different areas of the camp with relative ease, are a new spin on what could be considered a classic tale. That said, it is the fact that the story is so simple that leads to the film feeling drawn out at times, as we watch Saul drift around, seemingly with no end in sight.
As director, László Nemes made the decision to focus on the lead character, which allows everything else to fade to the background slightly. This leads to a powerful and haunting use of sound and colour, which are more than enough to tell the audience that is happening in the background, without showing us the gore and tragedy that we have seen in other films. Nemes allows the audience to root for the lead character although we are not always sure why – the title may or may not be a giveaway – and it is with him that the film is given life.
In all, SON OF SAUL is a haunting and oddly beautiful film, which deals with a simple story in a powerful way. There are some issues with pacing here and there, but SON OF SAUL is immersive and tragic, with a vein of hope running right through the centre.
Rating: 3/5
Review by Brogen Hayes