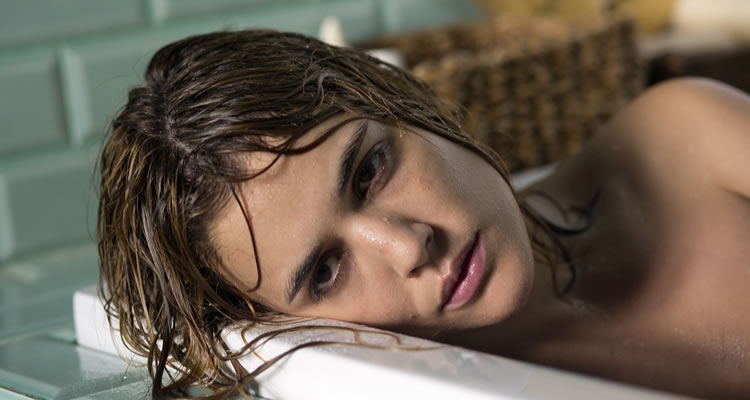 JULIETA (Spain/TBC/97mins)
Directed by Pedro Almodóvar. Starring Emma Suárez, Adriana Ugarte, Dnaiel Grao, Inma Cuesta, Rossy De Palma
THE PLOT: Julieta (Emma Suárez) is just about to move from Madrid to Portugal when she runs into Bea (Michelle Jenner) on the street. Bea tells Julieta that she has recently seen Julieta’s daughter Antia at Lake Cuomo. Since Julieta has not seen her daughter in many years, this throws her into chaos and causes her to cancel her new life plans and stay in Madrid, with the hope of reconnecting with her long lost daughter.
THE VERDICT: Based on the stories ‘Chance’, ‘Soon’ and ‘Silence’ by Alice Munro, Pedro Almodóvar’s latest film In Competition at Cannes has the director’s trademark melodrama and strong musical choices, but with a voiceover running throughout the course of the film, ‘Julieta’ is less an emotion piece and more a dramatised letter; which leaves it feeling unsatisfactory.
The cast, Emma Suárez, Adriana Ugarte, Dnaiel Grao, Inma Cuesta and Rossy De Palma do what they can with the film, and try to make ‘Julieta’ a character driven romantic thriller, but the screenplay seems to be working against them for much of the film. Suárez and Ugarte – playing Julieta at different times in her life – do the best here, with Ugarte obviously having fun with the younger more carefree version of the character, and Suárez making the older Julieta more broken and lonely, but these performances are not enough to carry a film whose motto seems to be “Tell, don’t show”.
Almodóvar’s adaptation of Munro’s stories transports the action to Spain, with the story beginning in the 1980s, when Julieta met Antia’s father. The film is told through flashback as the older Julieta writes a letter to her missing daughter – whom she has not seen for 12 years – and this is precisely where the problem with the film lies. By using the letter writing device, which can be used well on screen, Almodóvar relies on voiceover to do the work of telling the story, but while this works, it also emotionally undermines the film, with the audience continually being told how characters feel, rather than being allowed to experience it through what is being shown on screen.
As director, Almodóvar has a tendency to go for the dramatic, tele novella style of telling serious stories, and this is certainly the case for ‘Julieta’, with over the top, melodramatic music permeating the film – which also tells the audience how the characters are feeling, in case we missed the voiceover – and the film not so nimbly jumping through 30 years of story in 97 minutes. The performances are fine, with Emma Suárez and Adriana Ugarte making their respective versions of the title character different, with the audience clearly able to see character progression, but they are let down by an overly dramatic, overly simplified screenplay that doesn’t seem to trust the audience to pick up on nuance.
In all, ‘Julieta’ is a strange, overly dramatic film; of course there is heartbreaking tale in here, of a woman trying to understand why her daughter simply wlked away one day and never came back, but the emotional punch this film could have packed is diminished and undermined by continual voiceover and a screenplay that jumps through time, seemingly at will.
RATING: 2/5
Review by Brogen Hayes