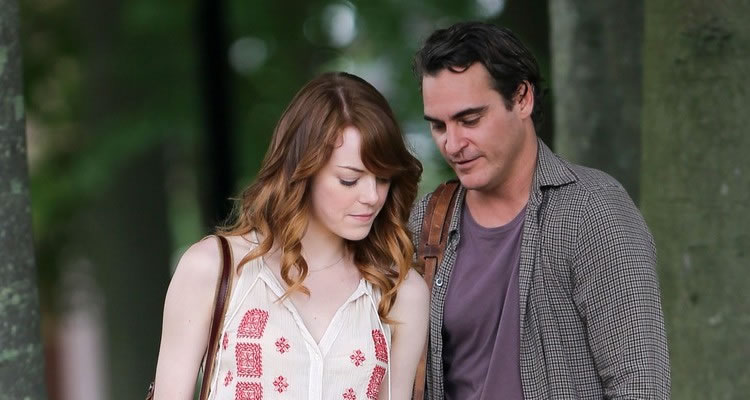 IRRATIONAL MAN (USA/TBC/96mins)
Directed by Woody Allen. Starring Joaquin Phoenix, Emma Stone, Parker Posey.
THE PLOT: Abe (Joaquin Phoenix) is the typical clichéd tortured professor; he struggles to find a meaning for life, although he seems Romantic to those around him. When he strikes up a friendship with student Jill (Emma Stone), and they overhear a conversation about a bullying Judge in a diner, Abe suddenly makes a decision that gives him a reason to live, and a new joy for life.
THE VERDICT: It seems as though Woody Allen has been going through something of a cinematic renaissance in recent years, with Midnight in Paris and Blue Jasmine getting critics and fans alike all excited about the veteran director again. However, the less said about To Rome with Love and You Will Meet a Tall Dark Stranger the better. Irrational Man falls somewhere in between these two extremes; not delightful enough to get us all excited again, but not dismal enough for us to give up hope either.
Joaquin Phoenix plays Abe surprisingly straight; yes, it is clear that this man romanticises himself and his life, and is one of those depressives who likes being depressed, but Phoenix never goes overboard with the character, even as he swirls toward madness, but keeps him relatable and slightly comic. There is the feel that Phoenix is playing the ‘Woody Allen’ character of the film, but he never strays into mimicry, instead putting his own spin on the character. Emma Stone plays Jill, a young woman swayed by Abe’s seeming complicatedness. Stone keeps Jill rooted in the world that we know, making her a typical 20-something whose first experience of the world leads to an inappropriate crush, but when the story comes crashing down around her, she reacts fairly and even with a little compassion. Parker Posey doesn’t get to do much, but is great as usual, and the rest of the cast is made up of Jamie Blackley, Meredith Hagner and Ethan Phillips.
Allen’s script for IRRATIONAL MAN keeps the film as close to a two-hander between Phoenix and Stone as he can. The dialogue is the familiar pseudo-intellectual that we have come to expect from Allen, although things quickly take a turn for the absurd and violet. Allen’s script is clever enough that we can almost see why Abe was driven to do what he does, but we are still allowed to judge him and empathise with those trying to solve the mystery.
As director, Allen keeps the conversations flowing, the inappropriate behaviour behind closed doors, and the deed that Abe carries out shocking and dark. Allen allows there to be a touch of all of us in Abe, but by moving the character to such extremes, while still making his actions come from a strangely rational place, Allen makes this a film not solely about the actions of one man, but the choices in his life that have led him to it. This is not a desperate man, but one who rationalises his actions through a twisted lens. Allen directs capably, keeping the conversations moving, the pacing strong and the revelation a sneaky one.
In all, IRRATIONAL MAN Man is a film about the motivations of one man, and how he rationalises the extreme action he takes. This is not the whimsy and comedy of Woody Allen at his best, but there is plenty in here on the nature of life, death and existence that will keep the audience engrossed. Allen makes use of his short running time, but never makes the film feel cramped or sluggish.
Rating: 3.5/5
Review by Brogen Hayes

Review by Brogen Hayes
3.5
Not Woody at his best