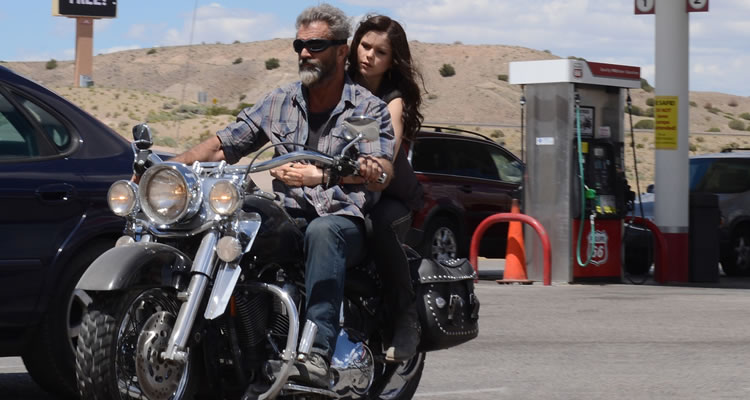 BLOOD FATHER (France/TBC/88mins)
Directed by Jean-François Richet. Starring Mel Gibson, Erin Moriarty, Dale Dickey, William H. Macy, Elisabeth Rohm.
THE PLOT: Living a clean and sober life since he got out of prison John Link (Mel Gibson) works as a tattoo artist and is trying to keep his head down. Link’s daughter has ben missing for three years, after she walked away from her mother’s home with no warning, so when she contacts Link out of the blue, he knows this is going to be trouble. He just doesn’t realise how much. Soon, Link finds himself in serious violation of his parole as he fights to save his daughter from drug dealers and thieves who are out to kill her.
THE VERDICT: Screening in the Midnight Screenings selection at Cannes, Mel Gibson’s latest feels like a natural follow up to his 2012 film ‘How I Spent My Summer Vacation’, with John Link being as reprehensible but loyal as the Driver in the previous film.
Mel Gibson easily carries this film as the offensive but loyal John Link. While this character is not afraid to offend or try to alienate those in his life, he is also charming and funny, with some great throwaway lines. Erin Moriarty appears in her second film at Cannes after ‘Captain Fantastic’ as Link’s drug addled, loud daughter, who has found herself in a situation that she cannot get out of. Like Maggie Grace in ‘Taken’, Moriarty does not have a whole lot to do here, but her chemistry with Gibson is solid, and the two work well together. The rest of the cast features Raoul Trujillo, Elisabeth Röhm, Diego Luna, Dale Dickey and William H. Macy in a small but pivotal role.
Based on the novel by Peter Craig, and written for the screen by Peter Craig and Andrea Berloff, ‘Blood Father’ feels rather familiar in a lot of ways; the comparison with ‘Taken’ is a fair one, but the film also feels like a postmodern Western, with the American landscape looking great and playing a large part in the film, and loyalties being brought into question and tested.
As director, Jean-François Richet – whose previous films include both ‘Mesrine’ films and ‘Assault on Precinct 13’ certainly brings his eye for action to ‘Blood Father’ and allows even the smaller parts in the film – such as Macy and Luna’s – to be pivotal and engaging, but he is consistently struggling against a screenplay that feel rather familiar, even down to the ending. The pacing is rather messy, with huge lulls happening throughout the film, but there is fun to be had with this beautifully shot, over the top family driven action film, especially when Gibson and Macy share the screen together.
In all, ‘Blood Father’ is not necessarily anything new, but there is plenty of fun to be had with the film. Gibson is on rare form and works well with the rest of the cast, Erin Moriarty does well enough with what little she has to do and William H. Macy is always a delight to watch on screen. It does feel as though ‘Blood Father’ is very inspired by films that have gone before, and is desperately trying to be a Western, but the action is fun and there is plenty to enjoy. It’s just all a little forgettable in the end though.
RATING: 3/5
Review by Brogen Hayes