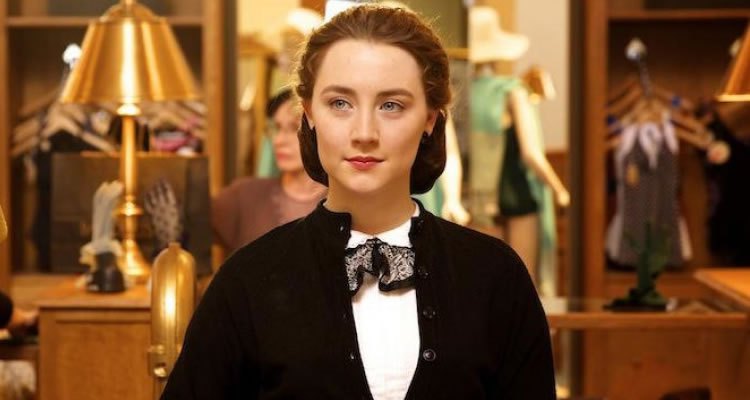 BROOKLYN (Ireland | UK | Canada/12A/111mins)
Directed by John Crowley. Starring Saoirse Ronan, Domhnall Gleeson, Emory Cohen, Emily Bett Rickards, Julie Walters, Jim Broadbent.
THE PLOT: In the 1950s, Eilis Lacey (Saoirse Ronan) emigrates from Enniscorthy to Brooklyn. Initially homesick, Eilis struggles to make friends in the big city, until she meets Tony (Emory Cohen), a young Italian man who she quickly falls for. When tragedy strikes and Eilis returns home for a visit, she is forced to choose between the life she left behind and her new one at the other side of the world.
THE VERDICT: Although perhaps best known for ‘Intermission’, ‘Brooklyn’ is not the first time that director John Crowley has delved into the world of gentle drama; he also directed ‘Is Anybody There?’ in 2008. With ‘Brooklyn’, Crowley has cemented his place as an Irish filmmaker on the world stage, and created a moving and warm look into the life of an Irish immigrant in the US.
Saoirse Ronan is wonderful in the leading role; both feisty and overwhelmed, with plenty of charm and wit. It is mostly through Ronan’s eyes that we see the film, and her homesickness and grief at leaving her home are writ large across her face. Domhnall Gleeson has a small role as Jim Farrell, one of the men who Eilis must choose between, the other, Tony, is played by Emory Cohen with a gentle charm. The rest of the cast is made up of Jim Broadbent, Brid Brennan, Emily Bett Rickards and Julie Walters in a fine turn as an over bearing Irish ‘mother’ to a boarding house full of young women in Brooklyn.
Colm Tóibín’s novel was adapted for the screen by Nick Hornby, who has drawn out the grief and the heartbreak of leaving home and everything you know behind, and blended in some honest truths. The screenplay deals with the concept of homesickness, and the conflict within Eilis as she tries to reconcile her feelings at wanting to get away and live her own life with her loyalty to her mother.
As director, John Crowley has created a slow and gentle film, and coaxed a stellar performance from Saoirse Ronan. The film does feel a little messy at times, as it jumps through time quite regularly, and from time to time, does not show how relationships between the characters have changed, only that they have. That said, the film is beautifully designed, and Ronan is at the top of her game, ably carrying this emotional and heartbreaking story of love and loss.
In all, ‘Brooklyn’ is a film about leaving your old life behind and starting a new one. The themes of love and grief are carefully explored here, and Ronan is on beautiful form in the leading role. There are times when the film jumps around in time a little too much, but the final effect is moving, endearing and heart warming.
RATING: 4/5
Review by Brogen Hayes