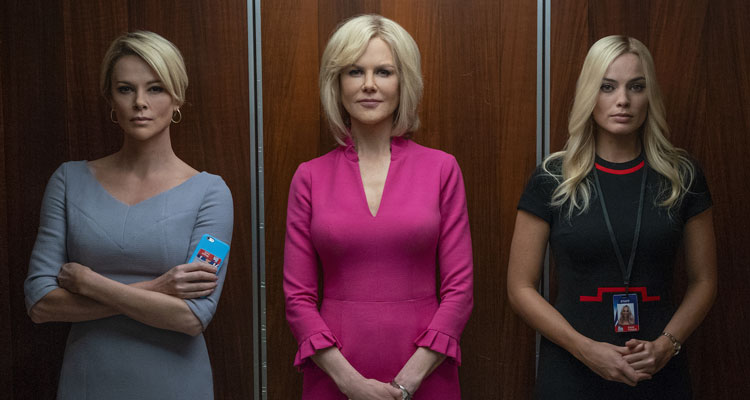 The Plot: New York, 2016. With the US election machine gearing up, Fox News anchor Megyn (Charlize Theron) finds herself in a war of words with sexist Presidential candidate Donald Trump. She’s used to ruffling feathers though, even though network bigwig Roger Ailes (John Lithgow) has a hotline to Trump. Working as a woman in Fox News comes with its own expectations, something which Roger makes clear by insisting on showing some leg on news reports. That’s not all he asks for. Gretchen (Nicole Kidman) was demoted when she resisted Roger’s advances and is now considering a sexual harassment lawsuit. Meanwhile, new employee Kayla (Margot Robbie) finds herself caught in the crossfire and an internal power struggle begins to expose the truth about Roger’s behaviour…

The Verdict: How much should we trust a film that is at great pains to emphasise that what we’re watching is a dramatisation of reported events? That it even has to point out that there are actors involved, to distinguish them from the real-life personalities that appear via archival footage? Bombshell begins – and ends – with a legal disclaimer as such, just so we know. Maybe it’s Lionsgate’s legal department getting itchy about tackling the downfall of a major media personality. It could also be that the film isn’t nearly as challenging or provocative as one would hope for. It’s been called the first #MeToo film, charting how Fox News head honcho Roger Ailes’ mistreatment of women in his office was called out by one reporter, which then lead to a domino effect as others came forward (a visual metaphor which director Jay Roach not-so-subtly employs).

The right-wing, Republican-supporting Fox News formerly had a slogan of ‘fair and balanced’ – something which its reputation on the world stage would suggest otherwise. That lack of balance extends to its own workplace, in which women are regarded as eye candy that have to show their loyalty to Roger if they want to climb the network ladder. Charles Randolph’s script is structured to view the situation through three different women with different perspectives on this toxic atmosphere. Megyn, who repeatedly denies being a feminist, played the game and got what she wanted. Gretchen didn’t and felt demoted as a result. Kayla is an ambitious new employee who finds herself at a moral quandary over what to do. In the film’s only squirm-inducing scene, Roger privately asks Kayla to lift her skirt up higher, to show her loyalty and commitment to him.

Structuring the film through these female perspectives and how they find common ground is a confident move on behalf of Randolph and his director Roach. Mostly know for directing comedies like Meet The Parents, Roach rightly positions the film about these talented women rather than about the ogre in the plushy office who abuses his position of power and thinks he can get away with it because who would dare question him? Well, maybe his own boss Rupert Murdoch (Malcolm McDowell, in all-too-brief appearance). As things heat up in the Fox News office and a controversy brews, an atmosphere of suspicion builds which works well dramatically-speaking.

It’s compelling viewing throughout, holding your attention through fine performances especially the fearless Theron. Though, the facial alterations through make-up effects can be distracting. An unrecognisable John Lithgow (apart from that distinctive voice) gives a subtly slimy performance as Roger Ailes. Burying him in prosthetics is the strangest casting decision since turning Gary Oldman into Winston Churchill, but it works. Other elements of the film don’t work as well though. The comedic touches bring some light humour to a serious subject, but they only emphasise that this is a surface-level skim of a much bigger story (the end credits hint at parallels with Harvey Weinstein). It needed to be braver and more direct in tackling its egregious abuser, rather than having him slink away like a shamed and wounded animal. Bombshell is good dramatised showbiz entertainment, but is somewhat shallow as a result. It’s an explosive expose, but the shockwaves only go so far.