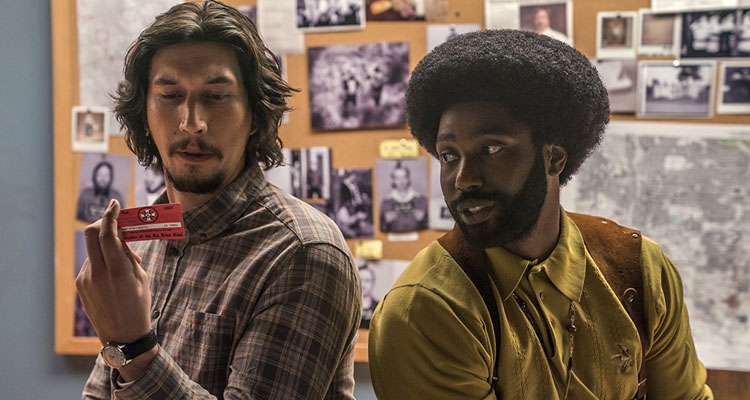 In short: Vital and urgent

The Plot: Colorado Springs, the 1970s. Ron (John David Washington) is an idealistic young African American man who dreams of shaking things up. He starts by joining the local Police Department, where he wants to become the town’s first black detective. Having convinced the Chief (Robert John Burke) that he’s worth more than being in the records room, Ron is tasked with monitoring a local black power movement fronted by student president Patrice (Laura Harrier). Not content with just that, out of the blue he phones up the local chapter of the Ku Klux Klan and poses as a white racist. Something troubling is bubbling underneath this otherwise quiet town, so he asks white Jewish officer Flip (Adam Driver) to pose as him during some KKK meet-ups. He also gets in touch with the KKK head honcho himself David Duke (Topher Grace) and ascends the heights of the ‘Organisation’…

The Verdict: That old saying is true. The more things change, the more they stay the same. It’s a saying that is sadly applicable to KkKlansman, an at times incendiary piece of stirring cinema from one of America’s most vital and vocal directors – the great Spike Lee. While others like Oliver Stone have softened their edges in their elder years, Lee remains a firebrand, stoking up discussion about America’s ongoing problem with just how to deal with its racial tensions, particularly when it comes to the police and the African American community. Or rather not deal with it. What Lee wants though is a civilised discussion, not a violent confrontation.

Lee describes BlacKkKlansman as a contemporary period piece, in that it’s as much about now as it is about the 1970s. It’s based on the kind of story that could only have happened in reality, as it wouldn’t work if someone had conjured it out of thin air. Approached by Jordan Peele with the high concept description of ‘Black man infiltrates Ku Klux Klan’, Lee is the perfect fit for such a story. His filmmaking style here is part comedy, part thriller, part political and social commentary. It’s a heady and potentially explosive mix but with decades of experience behind him, Lee navigates these tricky waters with careful ease.

Take the seamless transitions between Ron and Flip, as they switch roles and find themselves digging deeper into the higher echelons of the KKK. Working closely with his lead actors, he pushes their performances towards a comfortable credibility. Washington, son of Denzel, is a chip off the old block. Not only has he got his father’s considered voice, weighing every word for impact, but he also sells the confident swagger and ballsiness of his character. Driver doesn’t hold back either, contributing towards a double act where the greater good is the mission.

Racism in all its ugly forms runs through many different aspects in this film. Not just in the characters, environment and even the institutions, but also in cinema itself. Lee starts the film with a clip from Gone With The Wind and then D.W. Griffith’s now-tainted epic The Birth Of A Nation, showing how African Americans have been depicted in derogatory terms over the years. He ends with a chilling coda ripped straight from recent headlines – that of the Charlottesville riots a year ago, along with more than a few swipes at President Trump or ‘Agent Orange’ as Lee dubs him.

Lee’s message is one of peace though. While he has made more provocative films recently like Chi-Raq, BlacKkKlansman is still a vital, urgent slice of meaty cinema to get your teeth into. It’s also darn good entertainment. Commerce and art can co-exist when done with such style, confidence and boldness. Go see.