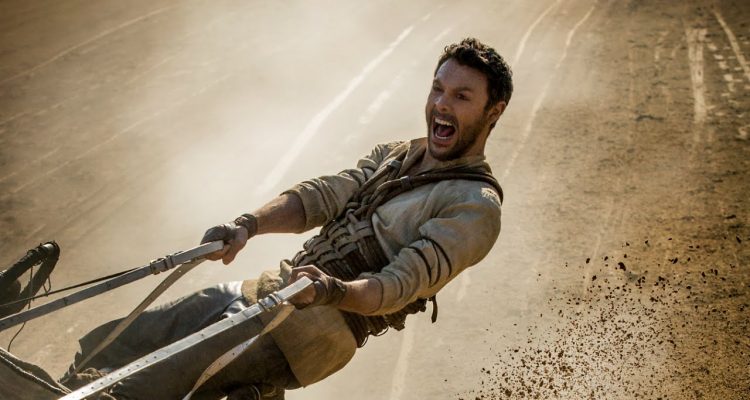 BEN-HUR (USA/12A/125mins)
Directed by Timur Bekmambetov. Starring Jack Huston, Toby Kebbell, Morgan Freeman, Rodrigo Santoro, Nazanin Boniadi.
THE PLOT: In the time of “The Messiah” Judah Ben-Hur (Jack Huston) and his adopted brother Messala (Toby Kebbell) have a strong bond until Messala leaves Jerusalem to fight with his people; the Romans. When he returns, Messala is a Captain of the Roman army, and petitions his brother to allow Pontius Pilate (Pilou Asbaek) safe passage through the Jewish city. When Pilate is attacked, Hudah is blamed, and after five years as a Roman galley slave, returns home to seek revenge against the man he used to call brother.
THE VERDICT: There have been many versions of Lew Wallace’s 1880 novel made for the big – and small – screen, but the definitive film, the one many call the original, was released in 1959. Starring Charlton Heston and directed by William Wyler, this 1959 film was a three and a half hour, Technicolor epic. The 2016 pales in comparison with this ambitious and triumphant project, and leaves the audience wondering who exactly this film is for.
Jack Huston does fine in the leading role as Judah Ben-Hur, and it is clear to see that he is an actor with charisma and careful timing. Toby Kebbell also does OK as Messala, and Pilou Asbaek is sorely underused as the one-note Pontius Pilate. Elsewhere, Nazanin Boniadi struggles to make Esther feel like a rounded character, and Morgan Freeman brings some gravitas to proceedings – mainly through his voice – while hiding under a wig of grey dreadlocks.
Keith R. Clarke and John Ridley’s screenplay claims to be a new adaptation of Lew Wallace’s book, rather than a remake of earlier films, but there is massive deviation from the ‘Ben-Hur’ that audiences know and still love. As well as this, the dialogue in the film seems to be that of one-liners, rather than flowing conversation, and Messala is given little motivation other than he happens to be Roman by birth. Inserting characters from the Bible – Pontius Pilate in particular – seems clunky, as does Jesus turning up and spouting lines about how important it is to love thy neighbour. As for the final resolution… It is done in such a trite and saccharine sweet way that any patience left for the film quickly disappears.
As director, Timur Bekmambetov struggles to get the momentum of the film moving, relying on big set-pieces to do the work for him. There is little development of the characters, with many of the women seeming generic and interchangeable. Although the idea that forgiveness is stronger than hate is a powerful one, the soft-focus constant repetition of this message becomes tiresome and drawn out. The chariot race scene, which many fans will be waiting for, is fast paced and tries its best to be tense, but odd camera angles leave it hard for he audience to see just what is going on and why.
In all, ‘Ben-Hur’ is cinematic proof that just because something can be remade, it doesn’t mean it should be. The film is not quite bad enough to be laughable, but as it stands it is an exercise in boredom with a chariot race and other set pieces thrown in to try and up the ante.
RATING: 2/5
Review by Brogen Hayes