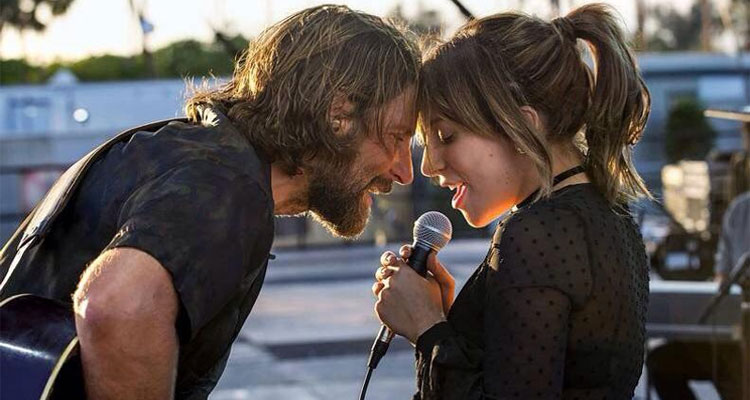 A Star Is Born

The Plot: Jackson (Bradley Cooper) is a famed Country & Western singer who is on a path to self-destruction due to his dependence on drink and drugs. Looking over-tanned and unkempt, he still pulls in the crowds but his best days are now behind him. One night, he stops at a bar where he discovers local talent Ally (Lady Gaga). Impressed by her soulful singing voice, he takes her out for a drink and gets to know her. She’s self-conscious about her looks, so she doesn’t sing the songs that she writes. He invites her on stage one night to sing with him and then lets her take centre stage. From then onwards, her star is in in the ascendant as fame and fortune beckons for her, along with a tender romance with Jackson. However, Jackson’s downward spiral only increases…

The Verdict: A Star Is Born has been adapted for the screen three times before, most notably in the 1954 version with James Mason and Judy Garland. Great stories are worth retelling though, hence Bradley Cooper taking the helm for a new adaptation based on the scripts of the 1954 and 1976 versions. It was originally set to be directed by Cooper’s buddy Clint Eastwood, but it may be just as well that Cooper took it on himself. Having shepherded it through several years of development, it’s very much his baby. If anything, it represents a career high for him as an actor and an auspicious start as a director in his own right.

This adaptation, which Cooper co-wrote with Eric Roth and Will Fetters, re-tools the story for the Country & Western scene and adds a modern sensibility about how fame can be instant before it eventually fades away, waiting for a comeback. The contrast between the meteoric rise of Ally and the desperate decline of Jackson amid a passionate love story is subtle enough not to draw too much attention to itself. The script is so well attuned to the voices of its two characters that it doesn’t lose sight of what makes them jump off the page so well. They compliment and balance each other out – the modest but ballsy Ally measured up against the well-meaning but directionless Jackson.

Cooper has proven himself before as more than just ‘that guy’ from The Hangover. He puts a lot of heart and soul into his performance, without detracting from his direction. He must have been paying attention when watching Eastwood. It’s a difficult role, in that Jackson has to remain sympathetic to the audience in order to understand what he’s going through. The real surprise here though is Lady Gaga AKA Stefani Germanotta. Setting aside her cameos in a few Robert Rodriguez films, the star is re-born here as an actress of serious weight.

Casting a famous contemporary singer in a dramatic lead role is a risk. It can work well sometimes (e.g. Madonna in Desperately Seeking Susan and Dick Tracy) or work horribly (Madonna in everything else). Lady Gaga though is a revelation as Ally – sweet, worldly and down-to-earth genuine. Even when Ally’s career starts to turn towards what may be called a fact / fiction crossover for Lady Gaga, she carefully nudges it back into the fiction realm. The decision to record the excellent songs live rather than lip-synch through playback adds further authenticity to both Lady Gaga’s and Cooper’s impressive singing voices.

For a first-time director, Cooper shows a considered command of his camera and how to get the best performances from his actors. He barely sets a foot wrong here, delivering a film that is full of soul, humour and human frailty that fully justifies another version of an oft-told tale. A Star Is Born that could go all the way to the Oscars next year, but like Ally it’s a modest film that doesn’t oversell itself. It’s a stellar piece of filmmaking that deserves to be a hit with audiences.