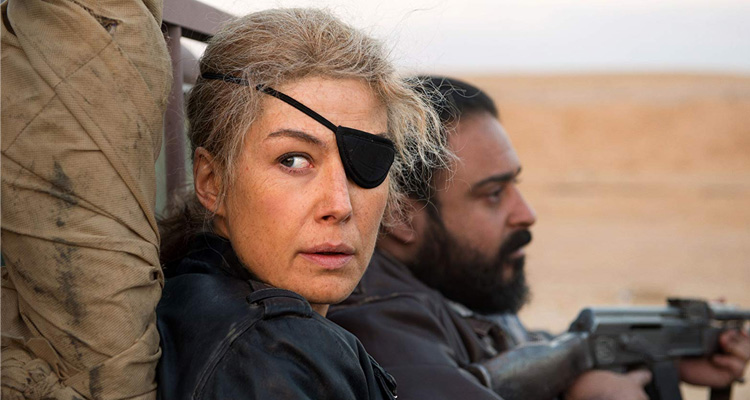 In short: A fitting tribute

The Plot: Starting in 2001, celebrated Sunday Times war reporter Marie Colvin (Rosamund Pike) loses an eye while reporting on a little-known war in Sri Lanka. Fearless to the core, she has a firm resolve to go where even other war reporters fear to tread. To tell the story of the real people on the ground, the civilians whose lives are in constant danger. She bonds with photographer Paul Conroy (Jamie Dornan) and they become an unbreakable team. Over the next 11 years, we follow the duo as they travel across the war-torn Middle East and then the devastating civilian losses in Homs, Syria…

The Verdict: The late Marie Colvin was a one-off. An extraordinary woman who had a fearless determination to inform the rest of the world about what was really going on in war-torn countries. Seven years after her death, the crusading journalist is still in the news. Just recently, an American court declared unequivocally that the Syrian Government was responsible for her death. What got her to that point is the focus of documentarian Matthew Heineman’s dramatic feature debut A Private War. It’s a fitting title, as Colvin was at war with the very notion of war itself and its impact on the lives of ordinary civilians on the ground.

Already the subject of a fine documentary last year, Under The Wire, the film is essentially a two-hander between Colvin and Conroy, as they embed themselves in the most hostile places on Earth, dodging bombs and bullets in the process. They report back to London where their nervous editor Sean (Tom Hollander) watches on in fascination and horror. While there’s already a level of familiarity involving Colvin and Conroy’s story from news reports, it’s still interesting to watch her story play out in a dramatised form. This is aided in no small part by Pike’s tremendously powerful performance, getting the mannerisms and drawly accent spot-on, but also digging deeper to hint at the effects of PTSD on her mind. It’s not an imitation, but more of a carefully-moulded and inhabited performance that brings her to life in her grim determination and sense of humour. Dornan provides good support too.

No fault to Pike, but Marie Brenner’s script (based on a Vanity Fair article) doesn’t quite dig deep enough. Not to the level that a truly great film requires, in which we examine what makes someone like Colvin really tick. The film is book-ended by a quote from Colvin herself, but after seeing what happened in between she’s still a somewhat elusive character. After his excoriating expose of Mexico’s drugs war in the excellent Cartel Land, Heineman gives off the impression that he’s still finding his feet when dramatising a real-life story. He’s unsure how to depict Colvin’s home life back in the American’s adopted home of London. There’s a one night stand-turned romance when Tony (Stanley Tucci) enters the story. It’s touching, but it doesn’t really go anywhere. Heineman is more alert and focused when in the warzones, which are depicted with gruelling authenticity in Jordan locations.

If Heineman can sharpen his focus for further films, then he could have a similar career to Kevin Macdonald, flitting back and forth between documentaries and dramatised features with ease. A Private War is a decent stab at it though, bringing Colvin’s remarkable story and essential humanity to the big screen. In a cynical era of fake news, it’s a fitting tribute to a woman whose life was committed to the pursuit of the truth at whatever cost.