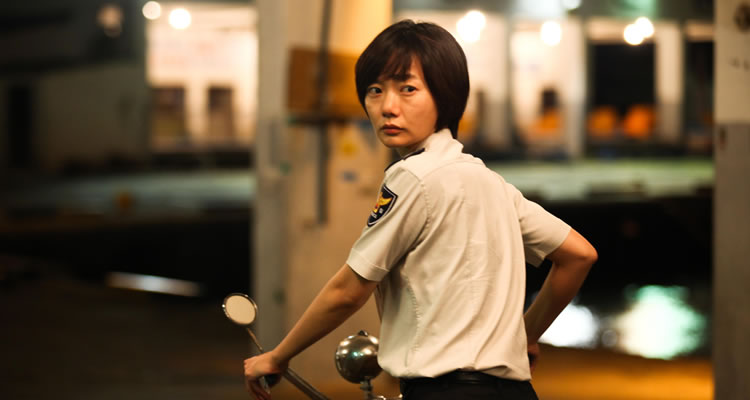 A Girl at My Door

A GIRL AT MY DOOR (South Korea/TBC/119mins)
Directed by July Jung. Starring Doona Bae, Sae-ron Kim, Sae-byeok Song, Hie-jin Jang
THE PLOT: When Police Chief Young-nam (Doona Bae) is transferred to a small Korean seaside town, she almost immediately meets two of the town’s most notorious residents; Park Yong-ha (Song Sae-byeok) and his mother Park Jeom-soon (Kim Jin-gu). Soon afterwards, Young-nam meets the emotionally troubled, bullied and beaten Seon Do-hee (Kim Sae-ron) and finds herself getting involed in the young girl’s life.
THE VERDICT: ‘A Girl at My Door’ is a slow moving but engrossing film, that has touches of Lolita about it, in all the most disturbing ways. Doona Bae is the emotional heart and soul of the film, and carries the story ably. Bae’s performance is subtle and understated, with the audience learning more about her as her past catches up with her. Kim Sae-ron is wonderfully innocent and disturbing as the young girl who Young-nam takes under her wing, and is as inscrutable as she is manipulative.
July Jung’s story is slow moving yet engrossing, with the relationship between the two women being given centre stage in the film. Camaraderie and friendship give way to anger and suspicion, before Do-hee finally reveals just how manipulative she can be. As director, Jung allows the story to unfold on screen, without the need for clunky exposition or rousing speeches. The audience is allowed to feel Young-nam’s depression and despair before finding out the cause of it, and we are taken on a journey with the two women at the heart of the film as their relationship grows and changes. The denouement of the film is shocking as it is troubling, but audience sympathy is firmly with Young-nam and her young charge; such is the power of their performances.
In all, ‘A Girl at My Door’ is a tale of friendship, dependency, violence and manipulation, brilliantly told by July Jung. There are times when the film loses steam – mostly when the focus shifts from Young-nam and Do-hee – but the final 20 minutes of the film is gripping, heartbreaking but oddly uplifting.
RATING: 4/5
Review by Brogen Hayes