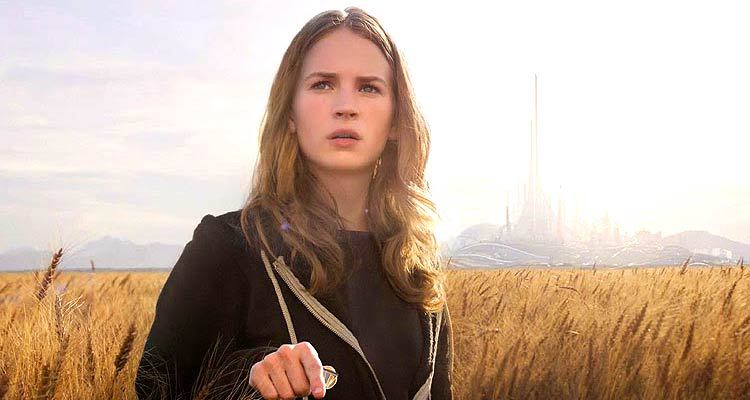 10 things you need to know about TOMORROWLAND

TOMORROWLAND is released in Irish cinemas this week, and stars George Clooney as a former boy genius, who finds his destiny tied with that of a scientifically curious young girl.
We love the retro futuristic look of TOMORROWLAND, and can’t resist a good sci-fi adventure, so we have gathered together 10 facts about the film for your reading pleasure…

1.1952
TOMORROWLAND was originally titled 1952 when it was greenlit in 2011, but the title was changed to the much catchier TOMORROWLAND in 2013.

2. Cast
George Clooney signed on for TOMORROWLAND in 2012, and is joined on screen by Hugh Laurie, Tim McGraw, Kathryn Hahn, Judy Greer and the young Britt Robertson who plays Casey.

3. Sneak Peek
Since mid-April, fans could catch a a sneak peek of the film at Disneyland and Epcot in the Tomorrowland and Imagination Pavilion theatres.

4. Direct
Pixar alum Brad Bird was sought out as the first choice for the director’s job of STAR WARS EPISODE VII – THE FORCE AWAKENS, but respectfully declined the offer in order to do TOMORROWLAND. Bird said that when you get the rare chance to do an original film like TOMORROWLAND you take the opportunity.

5. Reunited
TOMORROWLAND is the third collaboration between ARCHER star Judy Greer and George Clooney, after THREE KINGS and THE DESCENDANTS.

6. Greer’s Year
Speaking of the wonderful Judy Greer, she is set to have an amazing 2015. Not only does she star in TOMORROWLAND, but Greer also has a role in the highly anticipated JURASSIC WORLD, due for release in June this year.

8. Cover story
The Japanese trailer for TOMORROWLAND gives a deeper look into the plot of TOMORROWLAND, with the theme park seemingly being built to cover for the fact that the geniuses of the world – including Walt Disney – came together to build a secret world where nothing is impossible. Ooh.

9. Entryway
The doors into Tomorrowland seem to be wonderfully disparate and filled with a gleeful imagination; from secret slopes in the It’s A Small World Ride at Disneyland to… um… George Clooney’s bathtub, it seems the entrances to Tomorrowland are all around us.

10. When can I see TOMORROWLAND?
TOMORROWLAND is released in Irish cinemas on May 22nd 2015. Watch the trailer below…