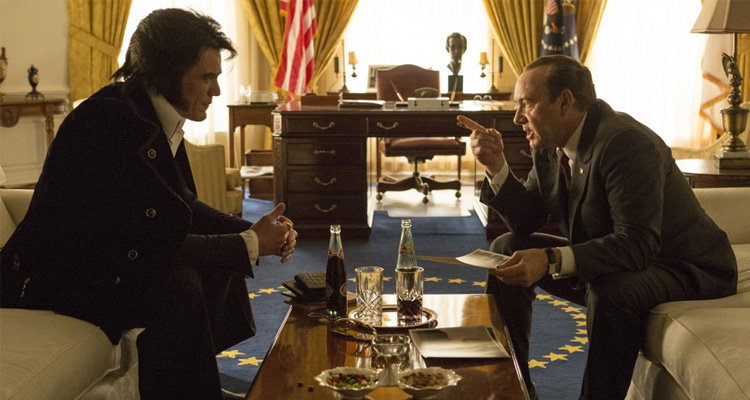 10 things you need to know about ‘Elvis & Nixon’

‘Elvis & Nixon’ is released in Irish cinemas this week, and stars Michael Shannon as The King – AKA Elvis – as he arrives at the White House one December morning in 1970, demanding an audience with President Richard Nixon, with a view to becoming an undercover agent for the Bureau of Narcotics and Dangerous Drugs.

To celebrate the release of ‘Elvis & Nixon’ in Irish cinemas, Movies.ie have gathered together 10 facts about the movie that you really ought to know.

1. Truth is Stranger than Fiction
‘Elvis & Nixon’ is based on the true story of Elvis unexpectedly arriving at the White House in 1970. A picture of The President and The King of Rock n Roll together is one of the most requested photos from the national archive.

2. Second Time Around
The story of Elvis’ meeting with Richard Nixon was made into a TV film in 1997, titled ‘Elvis Meets Nixon’, directed by Allan Arkush. The film was a mockumentary starring Rick Peters and Bob Gunton.

3. Ulterior Motive
Known for his love of drugs and handguns, Elvis did have an ulterior motive for campaigning for a role in the Bureau of Narcotics and Dangerous Drugs. In her memoir ‘Elvis & Me’, Priscilla Presley wrote “With the federal narcotics badge, he [believed he] could legally enter any country both wearing guns and carrying any drugs he wished.”

4. Casting
Kevin Spacey was announced as playing President Nixon in 2014, and Michael Shannon signed on in the same year to play Elvis, after Eric Bana dropped out of the role. As well as the two leads, ‘Elvis & Nixon’ stars Alex Pettyfer, Johnny Knoxville and Colin Hanks.

5. Writers
‘Elvis & Nixon’ was written by Joey Sagal – brother of ‘Sons of Anarchy’ and ‘Futurama’ star Katy Sagal – and his ex-wife Hanala. Cary Elwes – arguably best known as Westley from ‘The Princess Bride’ – joined the former couple in writing duties. This collaboration came about after the Sagals were inspired by a conversation at Elwes’ brother’s home; Cary Elwes then asked to collaborate on the screenplay.

6. Smaller Scale
In its original inception, ‘Elvis & Nixon’ was to be a micro-budget film with Joey Sagal playing Elvis. Sagal played Presley in the Stephen King mini-series ‘Nightmares & Dreamscapes: From the Stories of Stephen King’ and on stage at the Steppenwolf Theatre Company Production of Steve Martin’s play, ‘Piccasso at the Lapin Agile’. Sagal has a small role in the film as an Elvis impersonator.

7. Rumour
As well as writing, Cary Elwes was rumoured to be directing ‘Elvis & Nixon’ in his directorial debut, but this seems to be just rumour, as Liza Johnson is helming the film.

8. Connection
Both Kevin Spacey and Michael Shannon are Oscar winning actors; Spacey for his role in ‘American Beauty’ and Shannon for his role in ‘Revolutionary Road’. Both films were directed by Sam Mendes.