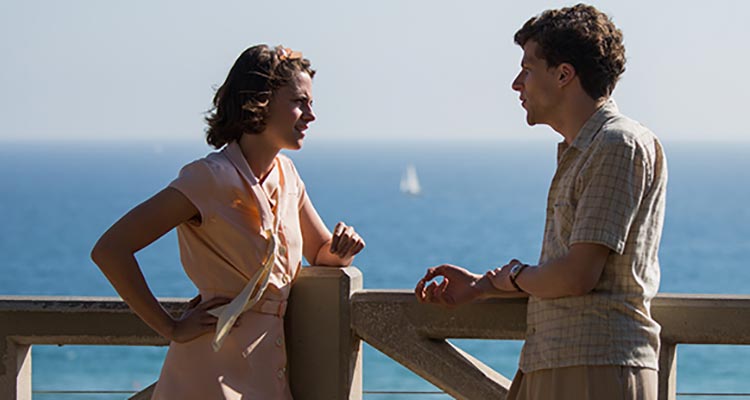 10 things you need to know about ‘Café Society’

To celebrate the release of ‘Café Society’, Movies.ie has gathered together 10 facts about the film that you really ought to know.

1. Re-cast
Woody Allen originally cast Bruce Willis in ‘Café Society’, but ended up firing him from the film after he tired of Willis’ behaviour and inability to remember his lines. Steve Carell replaced Willis in the role of Hollywood agent Phil Stern.

2. Audition
Kristen Stewart had to audition for her role as Vonnie in ‘Café Society’, the first time she had to do so since her role in ‘Twilight’, all the way back in 2008.

3. Opening Night
‘Café Society’ was selected as the opening film for the 2016 Cannes Film Festival. This is the third time a film of Allen’s has opened the festival, after ‘Hollywood Ending’ in 2002 and ‘Midnight in Paris’ in 2011.

4. Non-Competitive
Although ‘Café Society’ screened at Cannes, it was not included in Competition at the festival. Allen said in an interview with The Guardian; “For any group to come together and judge the work of other people is something I would never do. To make a judgment that this is the best, with the implication that in some platonic way it is the objective ‘best’, is something I don’t believe in. So I don’t want to participate in it”.

5. Move with the Times
‘Café Society’ is the first Woody Allen film to be shot on digital not film. Allen said, in an interview with this very website, that it was “silly to keep hanging back, because the tide of digital filmmaking is washing over us”.

6. Aspect Ratio
As well as on digital, cinematographer Vittorio Storaro shot ‘Café Society’ in 1:00:1 aspect ratio; the first time that a film of Allen’s has been shot in this way.

7. Structure
Woody Allen said he wanted the structure of ‘Café Society’ to be like a novel, this is why he decided to narrate the film himself; so the audience could hear the writer’s “voice”.

8. Off Screen
Speaking of Woody Allen’s narration, ‘Café Society’ is the first film that the director has narrated without appearing on screen since ‘Radio Days’ in 1987.

9. Jack Rollins
Jack Rollins was Allen’s co-executive producer for almost 40 years; he died in 2015 at the age of 100. ‘Café Society’ is Allen’s first film without Rollins.

10. When can I see ‘Café Society’?
‘Café Society’ is released in Irish cinemas on September 2nd 2015. Keep an eye on Movies.ie for exclusive interviews with the cast and crew, and watch the trailer below…