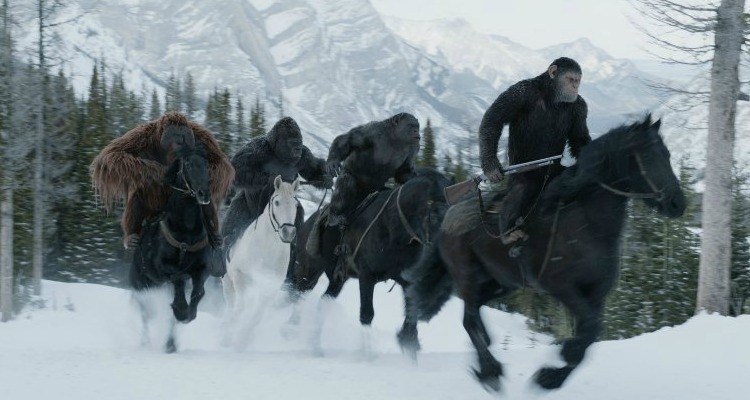 War For the Planet of the Apes

WAR FOR THE PLANET OF THE APES (USA/12A/140 mins)
Directed by Matt Reeves. Starring Andy Serkis, Woody Harrelson, Steve Zahn, Judy Greer, Amiah Miller, Toby Kebbell.
THE PLOT: After militant ape Koba (Toby Kebbell) launched a fierce war between the apes and the surviving humans, leader Caesar (Andy Serkis) sits upon a troubled throne. His apes are looking to him for strength, hope and comfort. It will not be easy to achieve any of this, now that these two worlds are plunged into a bitter conflict. A new human adversary emerges in the form of the ruthless Colonel (Woody Harrelson), who is intent on hunting down the apes and exterminating them once and for all. After an attack on the camp, Caesar sends his community to a safe refuge. He has his own mission, to confront the Colonel in his wintry fortress. He reluctantly accepts the support of Maurice (Karin Konoval), eccentric Bad Ape (Steve Zahn) and a young girl with a significant name (Amiah Miller)..
THE VERDICT: Almost a half century after it first appeared on cinema screens, the durable ‘Planet Of The Apes’ franchise found a new lease in life in 2011. Reboot ‘Rise Of The Planet Of The Apes’ turned out to be one of that summer’s genuine surprises. ‘Dawn Of The Planet Of The Apes’ followed in 2014, adding more complexity and an evolving storyline. Now the story comes full circle with ‘War For The Planet Of The Apes’.
While most movie trilogies predictably drop in quality with each instalment, that’s not the case with this trilogy. If anything, each film here has got progressively better. Looking back, it can now be viewed as a clearly-defined three-act story following Caesar’s evolution from lab ape to conflicted leader, worryingly driven by the same hate that consumed Koba. However, Caesar retains his essential respect for life in any form. He just wants peace and for his community to be left alone, while scattered pockets of the human race struggles against a demise of their own making.
Returning from Dawn, director Matt Reeves and co-writer Mark Bomback peel back the layers of this human / ape conflict, getting to the root of it with increasing moral complexity. There’s a well-defined contrast between Caesar, wrestling with his inner demons and The Colonel, who is an unpopular, hard-line figure even among the surviving humans. At its heart, this trilogy is about survival and co-existence, not about conflict. Conflict is just a by-product of this. Reeves scores highly in being able to keep a delicate balance and sympathy between the apes and the humans here.
More so than the previous two films, Andy Serkis’ performance breaks out of the performance capture suit and pushes at the pixels to become incredibly photo-real and convincing. With a grim look on his face and the weight of a potential new world on his shoulders, Caesar weighs every word, spoken or signed, slowly and carefully. Someone give Serkis an Oscar already or at the very least a nomination. The performances, in and out of the performance capture suit, are uniformly excellent too.
A particular mention should go to Michael Giacchino’s outstanding score. Rich and varied, it has touches of militaristic bombast, John Barry-style sweeping epicness and tender moments that gently underline the dramatic beats of the story. There’s no monkey business here. ‘War For The Planet Of The Apes’ is a very strong finish to this trilogy and undoubtedly a highlight of the summer blockbuster season.
RATING: 4 / 5
Review by Gareth O’Connor