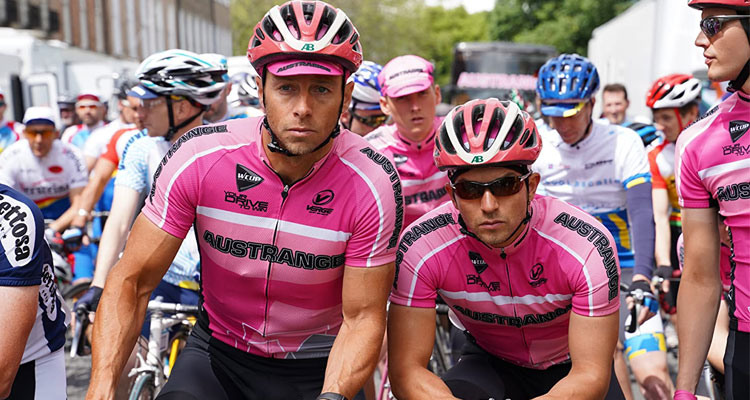 The Plot: Ireland, Summer 1998. For the first time, the Tour De France cycling race has left mainland Europe to hold three stages across the country. Dom (Louis Talpe) arrives with his team headed up by manager Viking (Karel Roden) and coach Sonny (Iain Glen). Dom is a support rider to lead rider Tartare (Matteo Simoni). The team of more experienced riders including Dom and Tartare are knee deep in illegal performance-enhancing drugs which push them to ride faster. Dom hooks up with local doctor Lynn (Tara Lee) while she is unaware of his illicit activities. This tour might be his most destructive, as the drugs take the toll on his body…

The Verdict: The 1998 Tour De France arrived in Ireland to much fanfare. However, riders quickly became embroiled in a doping scandal that overshadowed the event. It would be another year before Lance Armstrong would gain infamy and eventually be stripped of his seven winning Tour De France titles. This recent historical setting is the backdrop for the fictional events of The Racer. It relates the apparent last tour of aging rider Dom, as he struggles with both professional and personal crises over his illegal blood doping and what the future holds for him. His glory days are behind him, with nothing much to look forward to. Then again, he never really got a chance at glory. As a ‘domestique’, he’s not meant to win. He’s there to support the lead rider, creating slipstreams of air to push Tartare forward.

The script is based on an idea by Ciaran Cassidy, who co-wrote with director Kieron J. Walsh and Sean Cook. Like any good sports move worth its salt, it’s about the action on the field and the drama off it, building up a character portrait of a racer facing a mid-life crisis. In that respect, the script works well in conjunction with Louis Talpe’s athletic blood, sweat and tears performance. He anchors the film, revealing Dom’s strength and vulnerability at the turn of a wheel. Playing second (or third) fiddle and not being in pole position is something that weighs on Dom’s mind. What’s the point in racing if you’re not allowed to win amongst the other 163 riders? Even more so when he’s taking illegal drugs to race faster. This moral quandary over what to do gives the film an edgy nervousness, so that the audience is never quite sure how to judge the enigmatic Dom. Walsh is playing mind games with his audience and that’s allright. It makes for meaty drama and inter-team conflict.

Less certain and more ethically questionable is the development of Dom’s relationship with doctor Lynn. While rising star Tara Lee makes for an appealing female presence among the testosterone and bulging biceps, her character is woefully underwritten. Lynn becomes an important supporting player in Dom’s future as she discovers more about his past. At least, that’s what the script would have the audience believe. There’s not enough character development to explain the actions she takes, as she gradually becomes emotionally compromised. In a male-dominated film, this token female character deserved more especially by the end. However, it doesn’t overturn the balance of elements that Walsh has concocted. There’s a propulsive energy running through the race scenes, pumped up by Hannes De Maeyer’s energetic score to get the film over the finish line. A silver medal for effort.

In short: Gets to the finish line