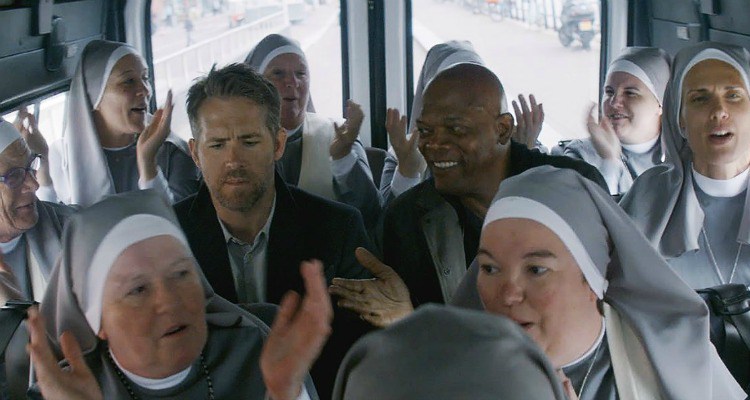 THE HITMAN’S BODYGUARD (USA/16/118 mins)
Directed by Patrick Hughes. Starring Ryan Reynolds, Samuel L. Jackson, Gary Oldman, Elodie Yung, Salma Hayek, Richard E. Grant.
THE PLOT: Executive protection agent Michael (Ryan Reynolds) finds himself demoted after a client is taken out at the last minute by a sniper. His life isn’t so good now, handling more erratic clients in London. Meanwhile at The Hague in Amsterdam, former Belarusian President Vladislav (Gary Oldman) is on trial for war crimes. The prosecution needs a star witness to nail him though. This is where notorious hitman Darius (Samuel L. Jackson) comes in. While being transported by Interpol agents, including Michael’s former squeeze Amelia (Elodie Yung), the convoy is ambushed by heavily armed Belarusians. Amelia calls in Michael to help. With the three of them on the run from Vladislav’s heavies, can they get to The Hague before the deadline passes?
THE VERDICT: ‘The Hitman’s Bodyguard’ is a mismatched buddy action comedy that could just have easily been made 20 years ago. Presumably with a Shane Black-written screenplay. The ace Hollywood writer/director, whose films include the Jackson-starring ‘The Long Kiss Goodnight’, is clearly an influence here. Tom O’Connor’s screenplay is loaded with over-the-top action, fruity language and constant bickering that gradually turns to mutual respect. Typical Black traits then. However, O’Connor’s script lacks that sparkling polish that can only come from a Black joint.
The screenplay is guilty of obvious signposting. When we first meet Vladislav, we already know he’s the bad guy. Within seconds, he executes a woman and her child. Screenwriting 101. There are some internal shenanigans involving Interpol too, with an insider that is easy to spot early on (it’s in the casting). However, once Michael and Darius get together the fireworks start flying. There’s an insane amount of carnage involved in this film – even more so than a Bond film. The streets of Manchester get ripped up during the ambush, while Amsterdam suffers a breakneck multi-vehicle chase with little regard to public safety. Only the bad guys get hurt. Maybe.
Director Patrick Hughes of ‘The Expendables 3’ fame stages the action sequences with flair though. Given recent terrorist attacks in Europe, the over-extended third act features a questionable sequence at The Hague. It cuts a little too close to the bone, but principal photography began before these incidents so it can be forgiven. Hughes makes good use of the chemistry between Reynolds and Jackson, riffing on the similarly-themed The Gauntlet. Oldman can only do so much with his cookie cutter villain. Hayek is under-used as Darius’ wife, but she does provide some good laughs. ‘The Hitman’s Bodyguard’ wobbles occasionally and is off target, but it’s still a fun, action-packed ride that gets by on the strength of the leads’ chemistry.
RATING: 3 / 5
Review by Gareth O’Connor