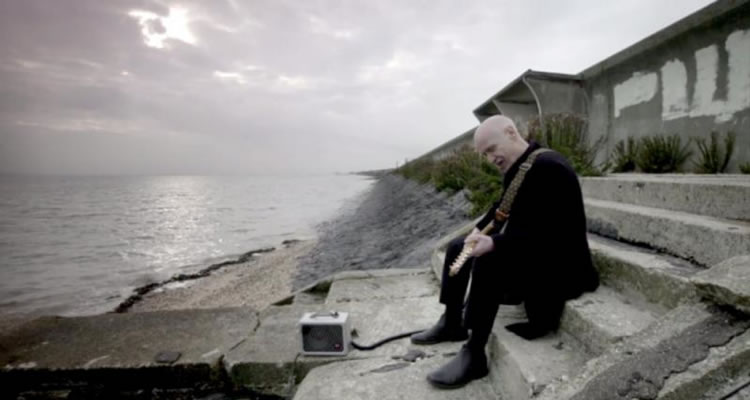 THE ECSTASY OF WILKO JOHNSON – Interview with director Julien Temple

With his documentary on maverick musician Wilko Johnson about to rock the IFI, director Julien Temple talks to Paul Byrne about getting the beat just right.

Having been fortunate enough to work with The Sex Pistols early on, Julien Temple quickly established himself as a filmmaker with 1980’s THE ROCK’n’ROLL SWINDLE before attempting to go mainstream with 1986’s ABSOLUTE BEGINNERS and 1988’s EARTH GIRLS ARE EASY. The latter was Temple’s Hollywood debut, and its failure at the box-office (despite featuring a young Jim Carrey in one of the lead roles) soon had him back in England, and back in the world of music. Now, with such titles as THE FILTH AND THE FURY (2000), JOE STRUMMER: THE FUTURE IS UNWRITTEN (2007) and OIL CITY CONFIDENTIAL (2009) to his name, Temple is regarded as one the UK’s finest, eh rockumentarists. Just, you know, don’t call him that.

As his latest offering, THE ECSTASY OF WILKO JOHNSON, comes to the IFI – opening on the 24th, but also launching their Rock’n’Roll Cinema mini-fest on the 21st – Julien Temple takes us behind the curtain. And behind the beat.

Having worked with Wilko before, did you fear that you might be going over familiar ground here?
JT: I decided this wasn’t a music documentary – it was about a man facing death. I don’t think the viewer would have to be aware of Wilko’s history, his musical journey, and all that – it’s about how this particular individual has faced the fact that he’s facing a death sentence. And that he’s been told that he hasn’t got long to live. That focuses the mind, and it’s the real story here. Wilko’s an incredible man, and the fact that he gets such good news during the making of the documentary just threw us all too. So, there’s an arc here…

And what an arc, Wilko given the all-clear last year, after undergoing radical surgery in April of last year…
JT: It’s a wonderful turn of events, and it gave us an unexpected happy ending. Still makes me smile…

Do you feel the need to be critical when it comes to your documentaries – or is it all about the human condition?
JT: As I said before, I don’t think this is a music film. I tend to just find the story as I talk to people, as I make the film, and with this one, let the story evolve from what we find. So, you end up with something a lot more natural. I’m not interested in doing the rockumentary thing of going through someone’s career album by album, and giving some kind of star rating. I like using the music as a kind of lens, to view the people who made it, and where they came from – the time, the place – and then, hopefully, find some kind of window into their world, into their souls.

You’ve put a lot of England’s musical jigsaw together over the last four decades – are you comfortable with being seeing as the filmmaker who likes to rock out?
JT: Yeah, I’m okay with that. I would hope people see that I live in the film world and the music world. I grew up inspired by music, at a time when music was reaching out to teenagers, and I felt that again when punk came around. So, I’ve always got that appetite for rock’n’roll, and the effect it can have on people, but I’m also fascinated by how film can affect us too. Put the two together, and it can be pretty incredible. It’s important ot me to make films that directly convey who I am as well as the subjects.

Given just how many music films you’ve made now – covering everyone from The Sex Pistols and The Clash to The Kinks, Weller, Iggy and Dr. Feelgood – you may as well walk up to most rockers with Eamonn Andrews’ old This Is Your Life book under your arm…
JT: Yeah, I should see if I can grab that somewhere. Would add a certain degree of class to my approaches…

You have a proposed Marvin Gaye biopic lined up on your CV, SEXUAL HEALING, with Brendan Gleeson leading the cast. I’m guessing the burly, redheaded Dubliner isn’t playing the sweet D.C. soul man, right?
JT: I’m sure Brendan could do an incredible Marvin Gaye, but, as it turned out, he was drawn to a different role here. Unfortunately, that movie has fallen through. We were two-thirds of the way through the shoot when the money dried up.

You’ve had experirences before with working in the commercial mainstream, with the likes of EARTH GIRLS ARE EASY (1988) and ABSOLUTE BEGINNER (1986) – still hope to beat Hollywood at its own game one day?
JT: I don’t think big movies that make lots and lots of money are really my forte, no. And it’s not really something I would enjoy doing, to be honest. There are some wonderful big Hollywood movies, but they are few and far between. I’m far more comfortable working on a smaller scale, and I’m sure if I had managed to score a hit with one of those movies, I’d be lying comatosed in a jacuzzi somewhere in Hollywood right now. I prefer being alive and well in Somerset.

Your daughter, Juno, has a fine acting career on the go, thanks to the likes of ATONEMENT, MALEFICENT and MAGIC MIKE. Juno turns 26 on the day that THE ECSTASY OF WILKO JOHNSON previews in the IFI – I’m guessing your war stories have helped her when it comes to the wonderful world of showbiz?
JT: I think Juno is entirely her own woman, and has always had her wits about her. I guess some of that comes from her family, but I feel Juno would always do things her way. Which, again, comes from the family. I hope.

So, what music are you listening to lately?
JT: I’m always looking for new stuff, but, right now, I’m listening to a lot of Cuban music. I’m making a film on Havana, and it’s just wonderful, digging deep here…

Do you get much of that George Martin fandom – people who feel you were a part of their teenage soundtrack?
JT: Yeah, I get letters or emails from certainly the punk era, but I’m not a Pistol, I’m a filmmaker. So, unless these guys want to know about lens…

THE ECSTASY OF WILKO JOHNSON opens the IFI’s Rock’n’Roll Cinema mini-fest on July 21st and opens on July 24th, 2015
For more on the IFI Rock festival visit http://www.ifi.ie/rock-n-roll