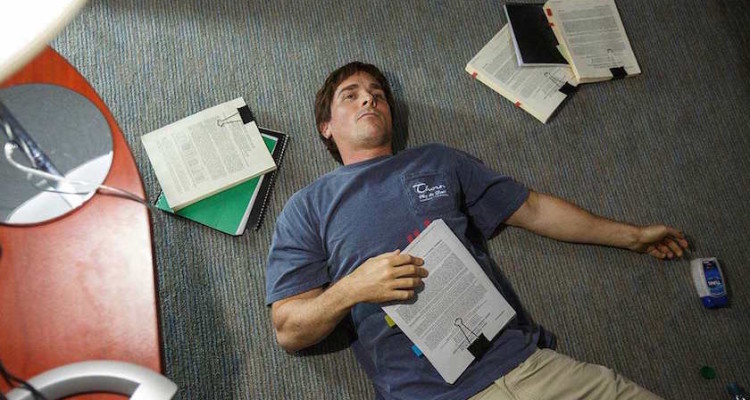 THE BIG SHORT (USA/15A/130mins)
Directed by Adam McKay. Starring Ryan Gosling, Steve Carell, Christian Bale, Brad Pitt, Melissa Leo, Hamish Linklater, Rafe Spall, Marisa Tomei.
THE PLOT: It’s 2005, and all is well in the world of finance. The property market, in particular, is booming. Really booming. It’s a fact that hasn’t gone unnoticed by hedge fund managers Mark Baum (Carell) and Michael Burry (Bale), as well as trader Jared Vennett (Gosling) and money-management operators Charlie Geller (Magaro) and Jamie Shipley (Wittrock), who each separately recognise that a hard rain is a-gonna fall. And with it, potentially, one humungous downpour of money.
And so it is that the five bet against the huge mortgages that have been repackaged into grossly overvalued financial products. Hmmm, wonder how they did…?
THE VERDICT: Wall Street having long been synonymous with those who not only see a silver lining on a black cloud but know how to mine it, ‘The Big Short’ is a sharp, witty and cutting comic drama about a small gang of Bottom-Of-The-Ocean’s 11 traders and fund managers who made a mint by gambling on the economic collapse of 2008. Whereas Oliver Stone’s Wall Street outings and Scorsese’s more recent Wolf Of Wall Street portrayed hard-nosed, dick-waving financial sharks in full flight though, this true-life story finds our would-be Gekkos largely awkward, and highly unlikely to inspire any t-shirts amongst the next generation of financial whizzkids.
That McKay – some distance from his regular collaborations with buddy and production partner Will Ferrell – manages to make the world of subprime mortgages, credit default swaps and other such financial skulduggery digestible here is a credit to a tight script (co-written by McKay with Charles Randolph, and based on Michael Lewis’ 1989 book, Liar’s Poker). It’s a smart script that doesn’t shy away from the super-smart details.
Ultimately though, McKay tries a little too hard to entertain, a move that robs ‘The Big Short’ of some of its potential punch. Still, you walk away knowing that McKay’s heart – and his boot – were in the right place. RATING: 3/5
Review by Paul Byrne