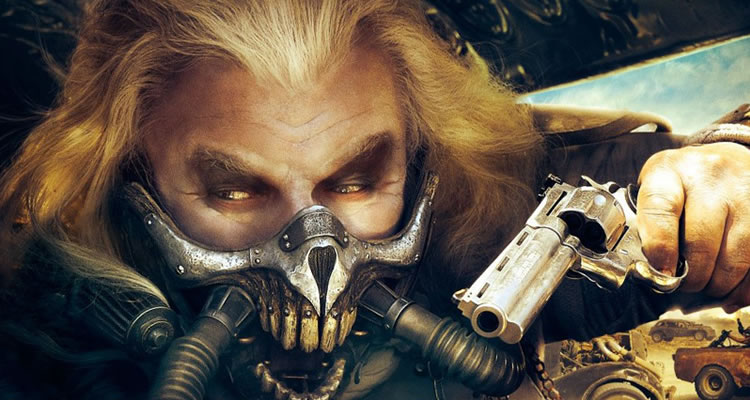 The best masks in the movies

MAD MAX: FURY ROAD is released in Irish cinemas this week, having screened at the Cannes Film Festival on Thursday. The main villain of MAD MAX: FURY ROAD is the frightening leader of The Warboys, Immortan Joe (Hugh Keays-Byrne), who wears one of the best masks we have seen on the big screen in a long time.
With Immortan Joe’s mask in mind, Movies.ie decided to take a look back at some of the best masks seen on the big screen…

Darth Vader – The STAR WARS Franchise
What would an article about masks be without a mention of the deadly and fearful Darth Vader. After being badly burned in lava and having his limbs severed by Obi-Wan Kenobi, Anakin Skywalker dons the famous black armour as a way to survive and turns to the Dark Side of The Force, taking the name Darth Vader.
Darth Vader has had a huge cultural impact since he was first seen on screen in 1977, and has been parodied, spoofed and paid homage to many times, including having a grotesque of his likeness carved into the east face of the Washington National Cathedral’s northwest tower.

The Phantom – THE PHANTOM OF THE OPERA
Born disfigured, but with a deep love of music, The Phantom lives underneath the Paris Opera house. When he first hears the young opera singer Christine Daaé sing, Erik falls madly in love with her, and will stop at nothing to gain her love, and give her the fame he thinks she deserves.
The Phantom first appeared on screen played by Lon Chaney in 1925, and has gone through may different versions since then. The mask has changed with almost every version of the character, and the famous half face mask used in the stage show seems to have been created especially for the show, and later the movie version starring Gerard Butler.

Ghostface – The SCREAM Franchise
After a high school student is murdered, and Sidmney Prescott (Neve Campbell) struggles with the one -ear anniversary of her mother’s murder, school is suspended for the safety of the students. Of course, the students don’t listen and throw a massive party to celebrate the school being closed. Of course, this is where the killer’s victims are, and where he is bound to strike…
Until the release of SCREAM in 1996, it was widely believed that the horror movie as a genre was in decline. SCREAM changed all of that, and made a cult figure out of the film’s villain, Ghostface. Ghostface’s mask is based on the painting ‘The Scream’ by Edvard Munch and was created and designed by a Fun World employee as a Halloween costume, prior to being discovered by Marianne Maddalena and Craven for the film.

V – V FOR VENDETTA
Evey Hammond (Natalie Portman) works for the state-run British Television Network and, on the night of November 4th, she is caught out past curfew, but is saved from possible sexual assault by a Guy Fawkes masked vigilante who calls himself V (Hugo Weaving). V takes Evey to his home, and tells her she is to remain there for a year, but she escapes, and suddenly finds herself in the crossfire between the vigilante, and the corrupt government.
Since the release of the V FOR VENDETTA graphic novel in 1982, and the film in 2006, V’s famous Guy Fawkes mask has become synonymous with protest around the world. As well as this, the mask has become a symbol for the hacktivist group Anonymous, and was used in the Occupy movement and other anti-government and anti-establishment protests.

Honourable Mentions to: THE MASK, HALLOWEEN and THE SILENCE OF THE LAMBS.

MAD MAX: FURY ROAD is released in Irish cinemas on May 15th 2015