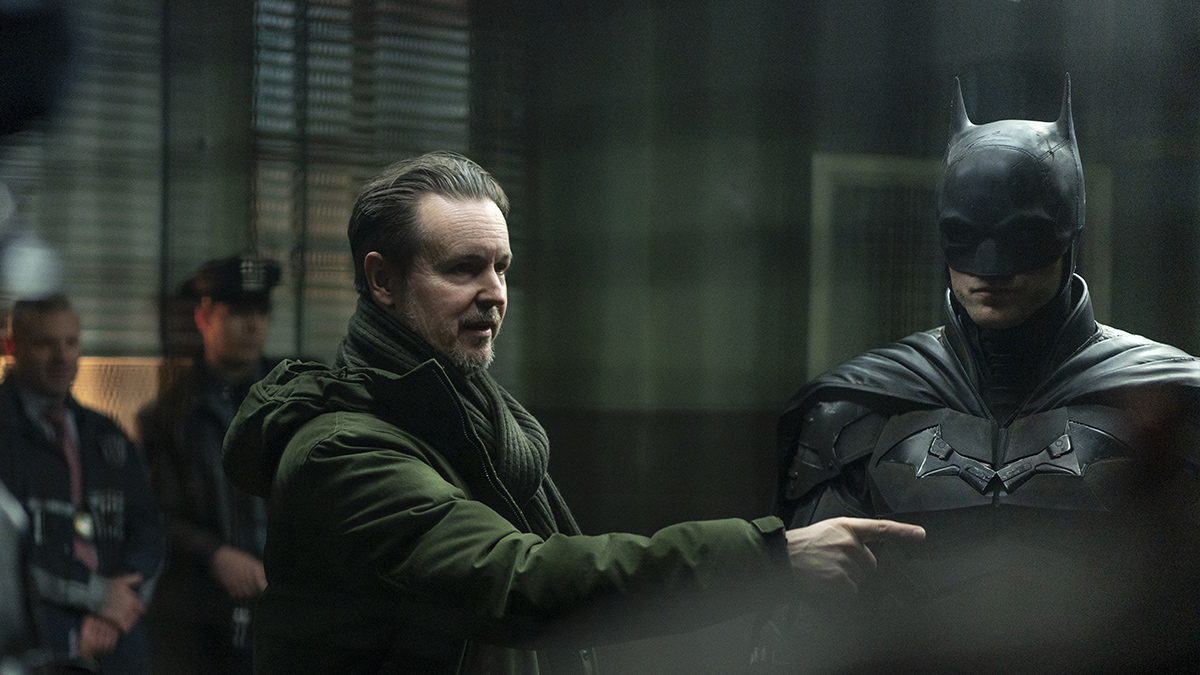 For this new cinematic outing Reeves found this personal connection by ignoring that Batman was a superhero and looking at his humanity, “To me, what was cool about this character is that he’s not a superhero, that he’s flawed. That he is a human being whose only real superpower is that he’s so messed up, that he’s driven. And he’s driven to do the right thing, but not for altruistic reasons. He’s driven that way because it’s personal”. Another way for Reeves to find his way into the film was to skip the traditional Batman origin story that we’ve seen many times on screen and focus on the idea that Batman is ‘The World’s Greatest Detective’, Reeves saw it as his chance to make a modern film noir. “I wanted to find a version of this character that was definitive. There have been so many great Batmen & there have been a lot of great origin stories, where you see him as a child and his parents are killed, and then you see the moment that he’s decided to become Batman and I didn’t want to do that because that had been done so many times and been done well. So instead, what I wanted to do was a story where, you met him as Batman in the early days, and that he had not yet perfected himself so that Batman himself would have an arc, that the story would come from an imperfect Batman, in the early days of trying to figure out what it even means to be good at what he does”.

Reeves was also drawn to the film after realising Batman is one of the few heroes that the average person could see themselves in, “It’s much more interesting to me” he explains,  “To see someone that I could see myself in, who’s doing these things that I would never have that, first of all, I’m not crazy enough to do it, but I’m also not brave enough to do it. And to see all of those things embodied one character, I think is incredibly compelling and very exciting and part of why this character has lasted for 80 years, because there is something about going back to that myth and reinterpreting it for those basic elements”.

Casting is vital when going for such a bold direction & Reeves originally surprised fans when he cast Robert Pattinson, who many only knew as the heart-throb from the ‘Twilight’ franchise, but Reeves saw a lot more to his acting and knew he was the right man for the job.  “I think that he’s done such interesting work, after ‘Twilight’, he did such a great creative thing, which was to go and seek out interesting filmmakers and to do really interesting roles and to not always be the star of the movie just to do interesting work. And he has grown into being an incredible actor. I saw a movie called ‘Good Time’ that he was in by the Safdie brothers. And in it, he’s from an East Coast City, which is how I always imagined Gotham, He had a street vibe to him, and he had a kind of desperation and an emotionality to him, so I could feel his rage. I could feel his drive, and I could feel him in a free-fall. And I thought, well, that’s who Batman is. Not this character exactly, but that he can has that kind of range.  And there was a flip side to the character too, I wanted to do a new and definitive version of Bruce Wayne because I felt like we’d seen him as the playboy who drives the Maserati’s and that kind of stuff. So I thought, instead of that, what if he was more like somebody who’s from a lineage of royalty, where something tragic had happened to some of the major figureheads of the family, and he was like, the progeny of the child who was living in the wake of that and they kind of become a recluse, that people would look at as if he sort of had kind of become a screw-up, somebody who maybe became a drug addict. He’s sort of like hiding away somewhere and they’re assuming ‘Oh, that guy just after what happened to his parents, you could never recover’.

And you would imagine that he’s some kind of drug addict. And I thought, well he is a drug addict, but the drug he’s addicted to is being Batman. And I started thinking of like a rock star and I started thinking of Kurt Cobain, and how the idea of being addicted to your work and being that haunted guy inside a beautiful, old Wayne Manor with your amplifier in the living room, and you’re just building stuff. And for some reason, that was the flip side of Bruce/Batman that I also saw in Rob, I thought he had that kind of Cobain, like handsomeness and that kind of Cobain like sensitivity. And so it was that mix of all those things. And in truth be told, this was all happening when I was writing and there was a point at which I said ‘What if Rob has no interest in Batman?’, and it really turned out to be a wonderful thing that he did.”

Another thing that attracted Reeve’s to making the film was his chance to pay homage to his favourite noir movies, in particular 1971’s ‘Klute’, 1974’s ‘Chinatown’ & 1976’’s Taxi Driver’. He compares Jake Gittes the protagonist of ‘Chinatown’ to his version of Bruce Wayne, “Jake Gittes was involved in something that haunts him from his past, which we don’t see. You don’t see Jake Gittes origins, but you know something bad happened to him. And you know it has to do with this place. And the thing about noirs is that the city and the place are always are so fatalistically drawn, that as much as you try to escape it, you get pulled back into it. By the end, as much as he thinks he can escape, Jake Gittes is squarely in Chinatown and he can’t escape the corruption of this place. And so that was hugely important because I thought, well, that’s really Gotham, because Gotham is a place where it’s so corrupt, that you’ll never escape your origins because it’ll constantly come back at you and I wanted to have a story that even though our detective is Batman/Bruce, it’s not his story, in terms of the crimes, that it would lead back to his story so that it ends up being a very personal noir detective story. So ‘Chinatown’ was huge in that, including his involvement with Selena. It’s very much like Evelyn Mulwray, he starts investigating her and he’s very, very unsure of her motives and what it’s about and it no matter what he does, it draws him closer and closer to her, and he never comes to understand the full truth of her involvement in the story until quite late in the story. And so that I borrowed structurally from ‘Chinatown’.

Alan J. Pakula’s ‘Klute’ was another important film to influence Matt Reeve’s take on Batman, “I watched that one a bunch of times”, says Reeves, “That’s a favourite movie of mine as well. This idea of a place was actually scary. There are moments of that movie that are almost like a horror movie, like a horror noir, and I wanted the movie to have moments of horror. I wanted the movie to be suspenseful and creepy in a way that we haven’t quite seen before. And so I borrowed from that movie liberally and also, again for the Selina/Batman relationship, the way that Klute has a kind of naive view of the world and he looks at Bree in this way where he judges her morally because of the world she’s in. He assumes all these things about her because of what she does, and the world she’s in, but he’s kind of removed from the reality of what it takes to survive in that city.  And that’s sort of true of Batman, right? I mean, Batman/Bruce had the luxury of having grown up a billionaire so yes, he has this tragic kind of thing that happened to him as a kid. But you know, he also has the resources to do all of these things that he’s doing, which Selina is a survivor. And so it’s very easy to kind of sit in judgment of someone when you haven’t had to sort of live through the kind of life that they’ve had to live and growing up in this place. And so that relationship was key as well, that he thinks one thing about what Selina is, is very much the way that Klute makes these judgments about Bree but he can’t help but fall in love with her in a way, he can’t help but be connected to her because he discovers her humanity. So that was a super important one.

Reeves also mentions ‘Taxi Driver’ as another Neo noir, that was really important to him while making ‘The Batman’, “I’ve heard Scorsese talk about that movie, that it’s like a gothic horror film. Right? So that’s totally Gotham, right? A gothic horror film is one of the aspects of things looking at the underbelly belly of the city. You know, Batman is a character who chooses to dwell in the underbelly he’s you know, he people see him as this kind of like rich guy who lives up in the tower but truthfully, most of his life is spent now. In the underbelly of the city. He sees the worst that people have to offer. And he somehow is swimming in this stream trying to kind of make sense of it all. And so in that way, ‘Taxi Driver’ was another big one”.

THE BATMAN is now showing in Irish cinemas