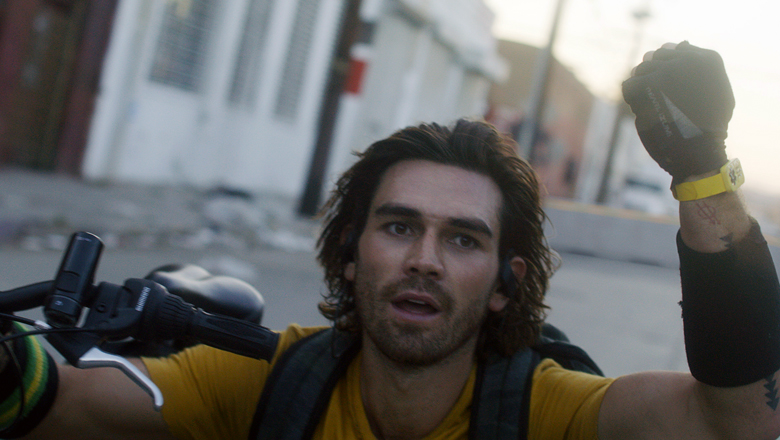 The Plot: Los Angeles, 2024. As the Covid pandemic continues to rage around the world, a disparate group of Los Angelenos find themselves four years into lockdown. With the deadly virus now airborne and reaching a 56% mortality rate, immunity is both rare and precious. Fortunately for deliver rider Nico (K.J. Apa), he has an immunity bracelet which allows him to deliver packages to houses via sanitation boxes. The people indoors don’t leave. One of them is his girlfriend Sara (Sofia Carson), who is due to be moved to a quarantine camp. Nico must race against time and engage with black market immunity dealers William (Bradley Whitford) and Piper (Demi Moore) to get a bracelet and bring her to freedom…

The Verdict: It has been the defining event of this year, possibly this century so far: the Covid-19 pandemic. It has changed the world as we know it. In a catastrophic year for the film industry, it was inevitable that it would come to play a part in our storytelling. While not the first film about the pandemic, Songbird is Hollywood’s first attempt to tackle the common enemy that has hobbled it and caused theatrical release windows to collapse even further. When the trailer for the film first appeared, it was slammed on social media as being in poor taste. Not really. Now that authorised vaccinations have begun and the tide is slowly turning as we look with hope towards 2021, Songbird already looks dated. Besides, nobody is going to mistake it for being close to reality.

The premise of the film is pumped up, Hollywood-style. In typical Tinseltown fashion, a real-life story is taken and given an unreality check. The pandemic is exaggerated for dramatic effect, depicting a barren Los Angeles where people remain housebound and Hazmat-suited soldiers roam the streets. Getting an immunity bracelet is the key to survival in this world where cinemas are a distant memory. It’s no surprise to learn that Michael Bay is a producer, as it has all the subtlety you’d expect from him. Whatever writer/director Adam Mason and co-writer Simon Boyes were doing during the spring lockdown, it certainly wasn’t working on the script. It’s meant to be an ensemble piece, but the characters are so thinly drawn as to be insignificant. There’s a love story ticking away in the background, but when there’s so much nonsense going on it’s hard to take the film seriously.

Exhibit A: Peter Stormare. The Swedish character actor is often a wild presence in a film. When cast in the right film he can bring some colourful antics, such as in Fargo. Here he’s out of place as a dodgy black market immunity dealer, threatening to imbalance the film’s supposedly serious tone. At least he had fun. The other actors (including Paul Walter Hauser and Alexandra Daddario) look glum and bored, perhaps because their union told them not to work on the film. Unemployed actors need to work in a pandemic though. Exhibit B: the frantic events of the film are too removed from our own new normal to be anything but speculative science fiction. The plot mechanics cough and splutter along, while throwing in killer drones and Daddario in her underwear in case audiences start to nod off. It’s all rather pointless, with an ending that will surprise nobody. Songbird is little more than a curio for posterity – that’s not a recommendation. In a few years from now when writers look back on pandemic-inspired films, Songbird will be found in the footnotes.

SONGBIRD is out now in Irish cinemas!

In short: A pandemic footnote